This informal article will outline some lives that Walter Shewhart and his wife, Edna, touched, and share some pictures that I believe may be of interest to the quality control community.

Walter Shewhart introduced the ideas of statistical quality control in his landmark book Economic Control of Quality of Manufactured Product, published in 1931. This book is still very readable today, in part because the concepts in quality are timeless and applicable to virtually every aspect of life.

A few years ago, my best friends, Darin and Erin, asked me to look after their pets and house while they were away for the weekend. One day, while looking for a book to read, I glanced at their bookshelf and to my surprise I was staring at the spine of a first edition copy of this book! I say "surprised" because my friends are not statisticians, and to my knowledge, have no other statistics books, and this book is something of a rarity. 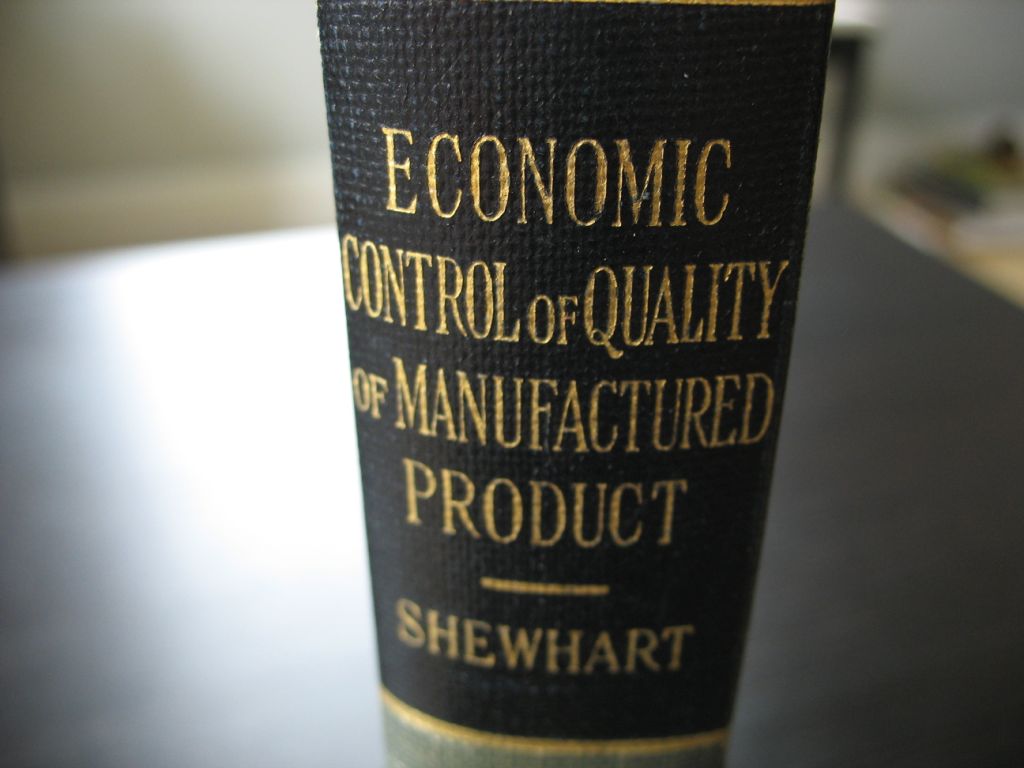 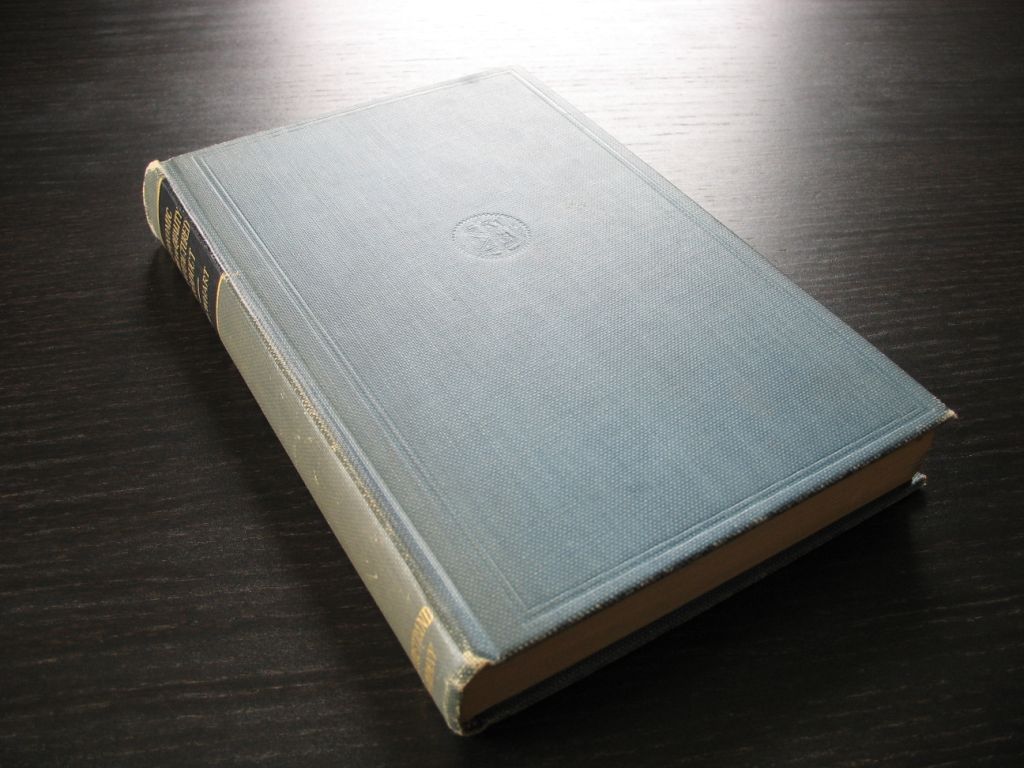 I eagerly opened the book to a random page and started reading. A few items fell out of the book. One was a clipping for a course on quality control taught by Shewhart, and the other was a newspaper clipping of Shewhart's obituary 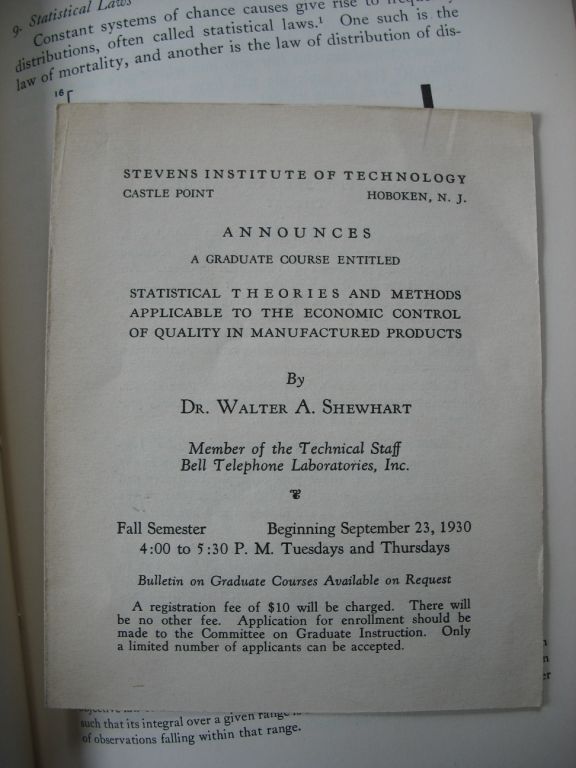 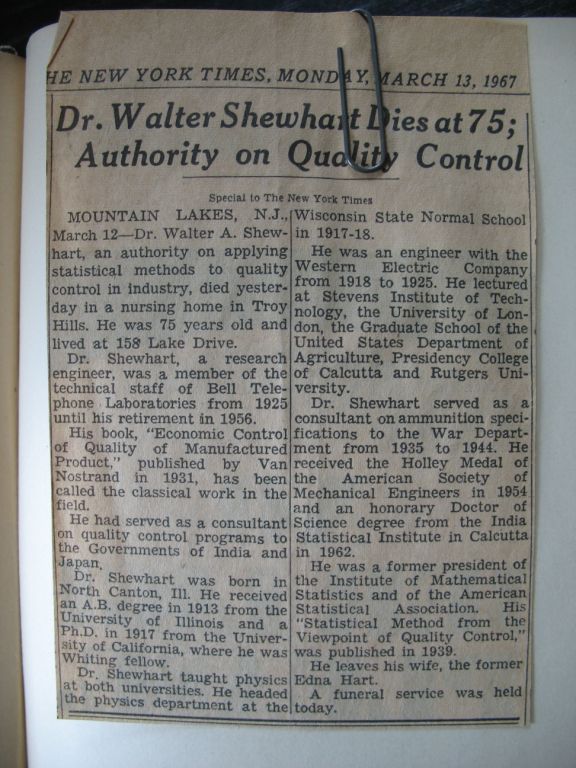 My first thought was: "Wow! Look at all he accomplished in statistics, and in life in general!" Then, I thought "OK, it is somewhat strange that my friends have this book, but stranger that they have a clipping of Shewhart's obituary." But the mystery didn't end there!

Before, in my excitement, I just turned to a random page and started to read. I then reasoned it would make more sense to start at the front and read it all the way through. On the inside of the book, I found this 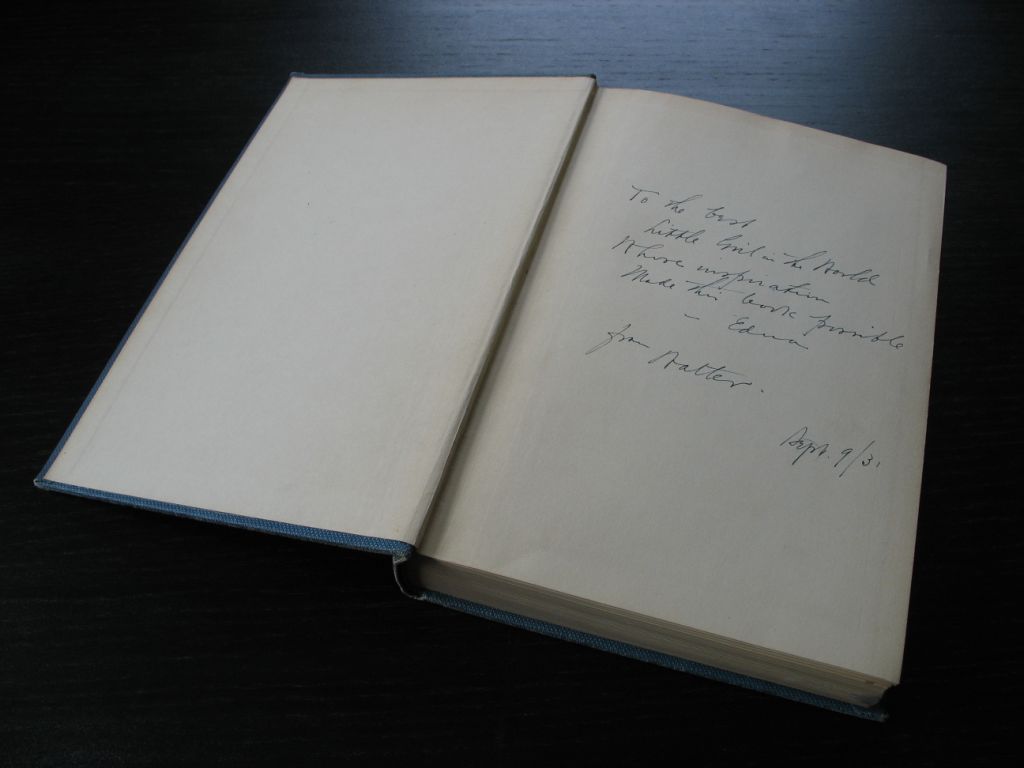 Is this message from the Walter to the Edna?

When my friends got back, I asked them about these suprises. Darin reminded me that his middle name is Walter, which he thought could be in honor of Walter Shewhart, and that he believed Walter and Edna were friends of some family members a few generations back.

Darin asked his mom about this. She wrote

Yes, your middle name is in honor of Walter Shewhart! He and his wife, Edna (Aunt Teddy, to us), were no relation to us but were very close friends with your Nana's parents.

The Shewharts were a third set of grandparents to me (more so than your granddads' parents were). The Shewharts are the ones who footed the bill for me to go to France during the summer after my Junior year of high school, via The Experiment in International Living (which is still active). Your Uncle Dick and I spent many vacations with them (they lived only an hour away). Plus, Uncle Dick lived with them at least one summer while he worked in New York City for the summer.

When you were 10 months old, you and I went on a road trip (okay, an airplane trip) to the East Coast. I was thinking of this not too long ago. We visited my old college roommate, Bina, in Watertown, NY (home of many winter record temperature lows); Alexandria, VA, to see Bubaba and Vuk who loaned me a car for us to drive to New Jersey to visit my friends Carol, then April, then Lynn, plus your great grandmother (Nana's mom); then we flew to Florida to visit Aunt Teddy.

Aunt Teddy loved and thought so very highly of her husband. He died March 11, 1967, so I would have been in 10th grade. As I remember, before he died, she would take me shopping and let me pick out a couple of outfits. But when we got back to their house, I was to go to Wawa and tell him thank you (by that time he was not in good shape, because of age plus a bad car accident).

I also remember at breakfast one morning the subject of why the raisins in the raisin bread were so much hotter than the bread after toasting. Wawa went into a scientific like explanation about why they were still hot. It's too bad your dad and Wawa did not get to meet. They would have had some great conversations!

Aunt Teddy made the trip to Oregon in early 1978 to visit us here. (Your great grandmother was never able to do that.) One of the things we did was to take her to Timberline. I didn't realize that the altitude would be a problem till we were walking from the parking lot to the lodge and she was having a hard time breathing! But she managed and we did not do her in!

I don't remember when Aunt Teddy gave me the book (Statistical Method from the viewpoint of quality control), which is the first copy of the book. In it Walter wrote, "To Teddy, Without whose inspiration throughout the years, this book would not have been possible. Walter 12/15/39". He noted in the book that he received this first copy on 12/14/39. [Note this is a different book than the one above. This is Shewhart's later book from 1939. I emailed his mom for clarification, and she said she has this later book, with inscription, as well.] I also have the original W.A.S. medal, plus 2 others. I also have a hard bound, "Tributes to Walter A. Shewhart". He is very welcome to look at these when he is here next time.

He can let us know what type of photos he wants or he can take them himself when he next visits.

Wow! It really is a small world- but one full of quality, thanks to people like Walter and Edna and the lives they touch.

I plan to update this page with pictures of the later book and the medals in the future.

I recently was back in Oregon and took some more pictures. 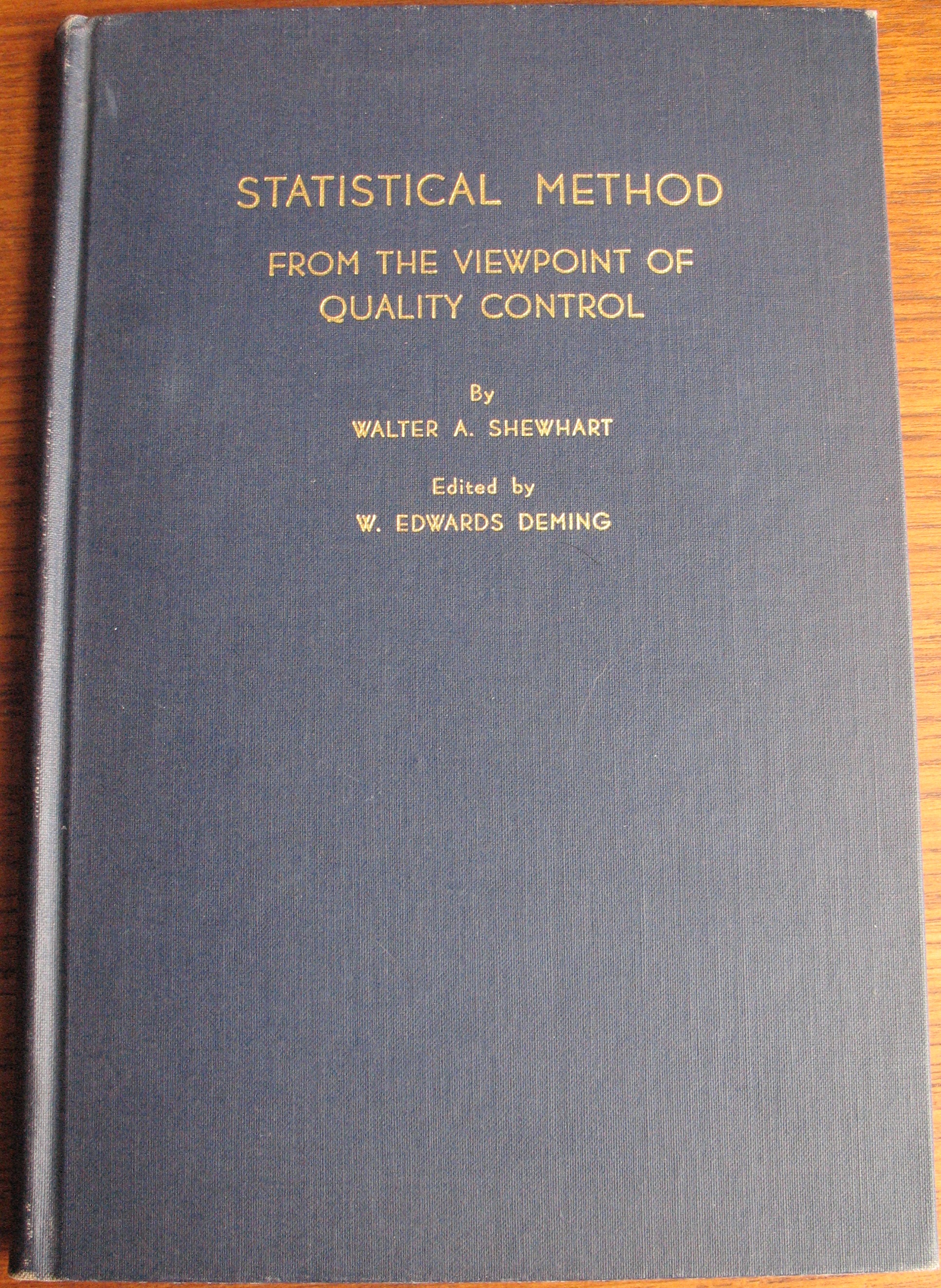 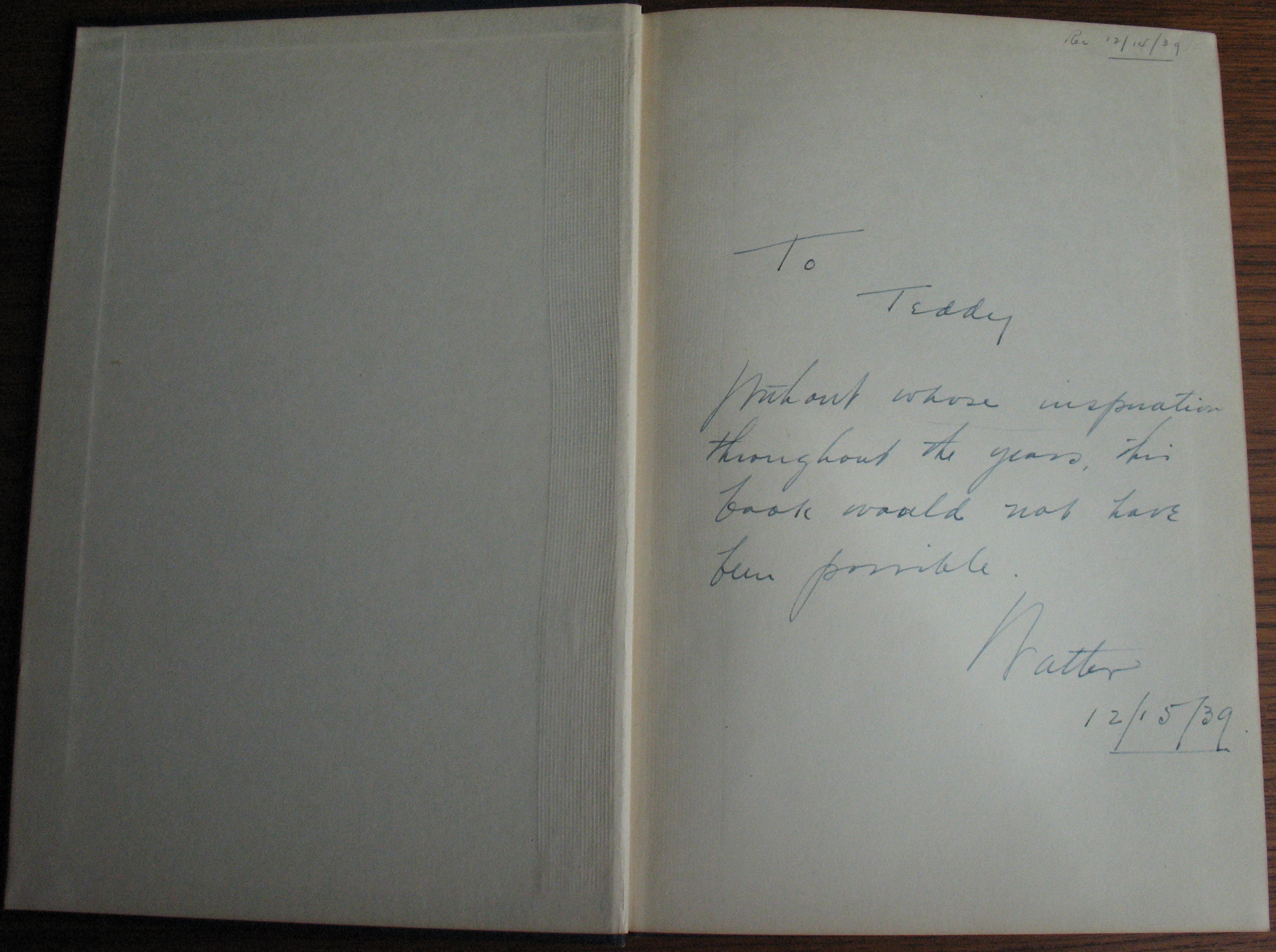 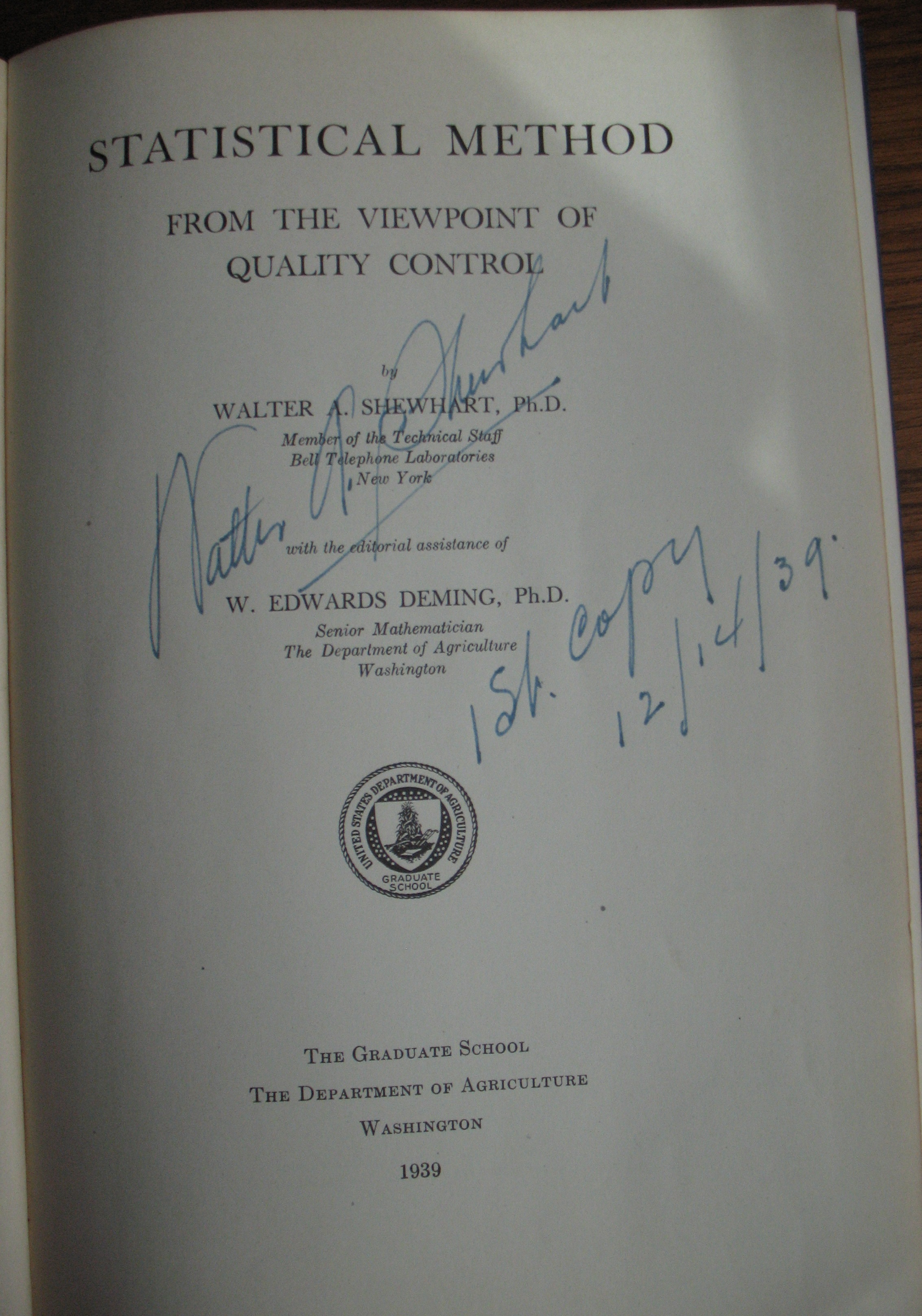 Statistical Method from the Viewpoint of Quality Control 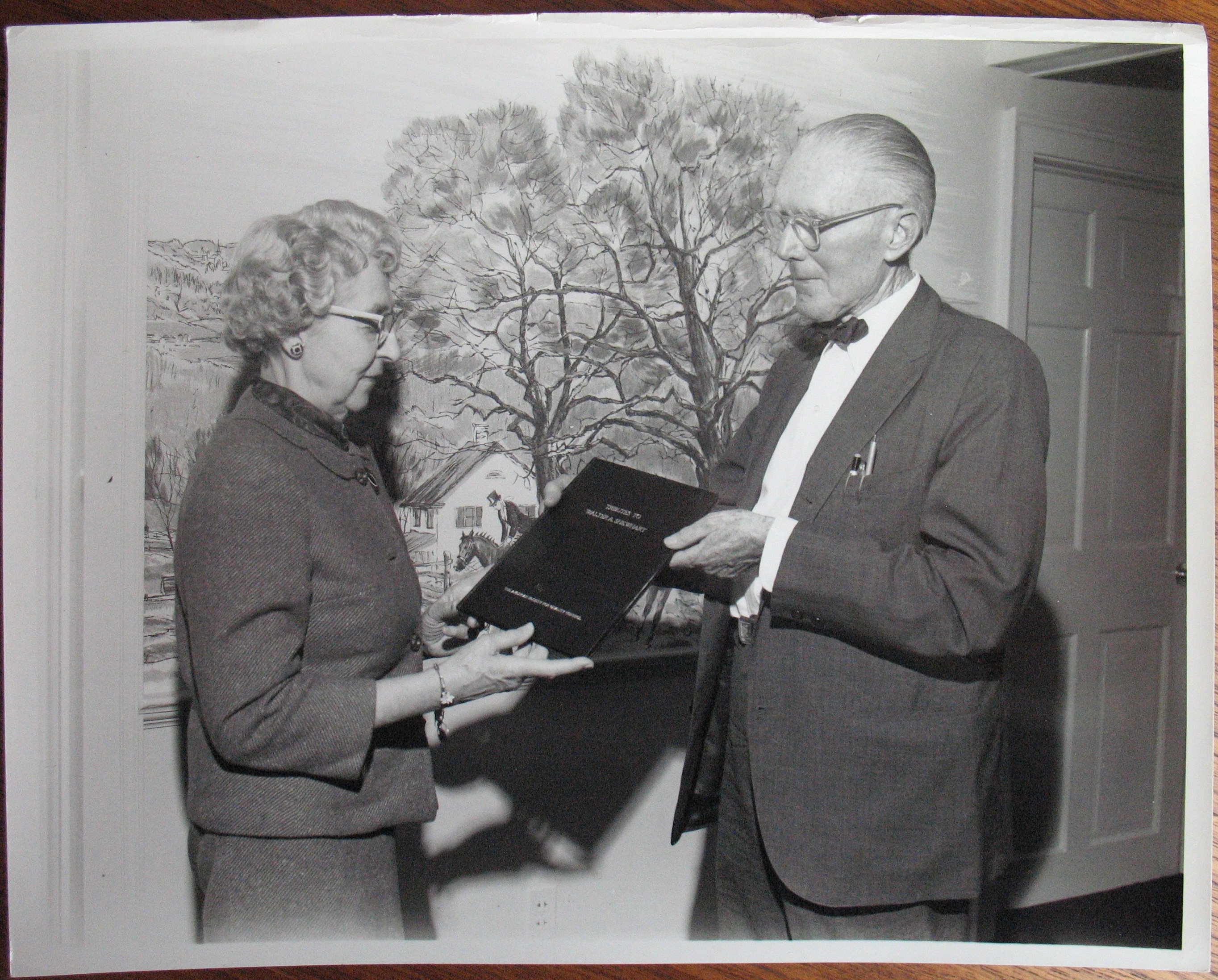 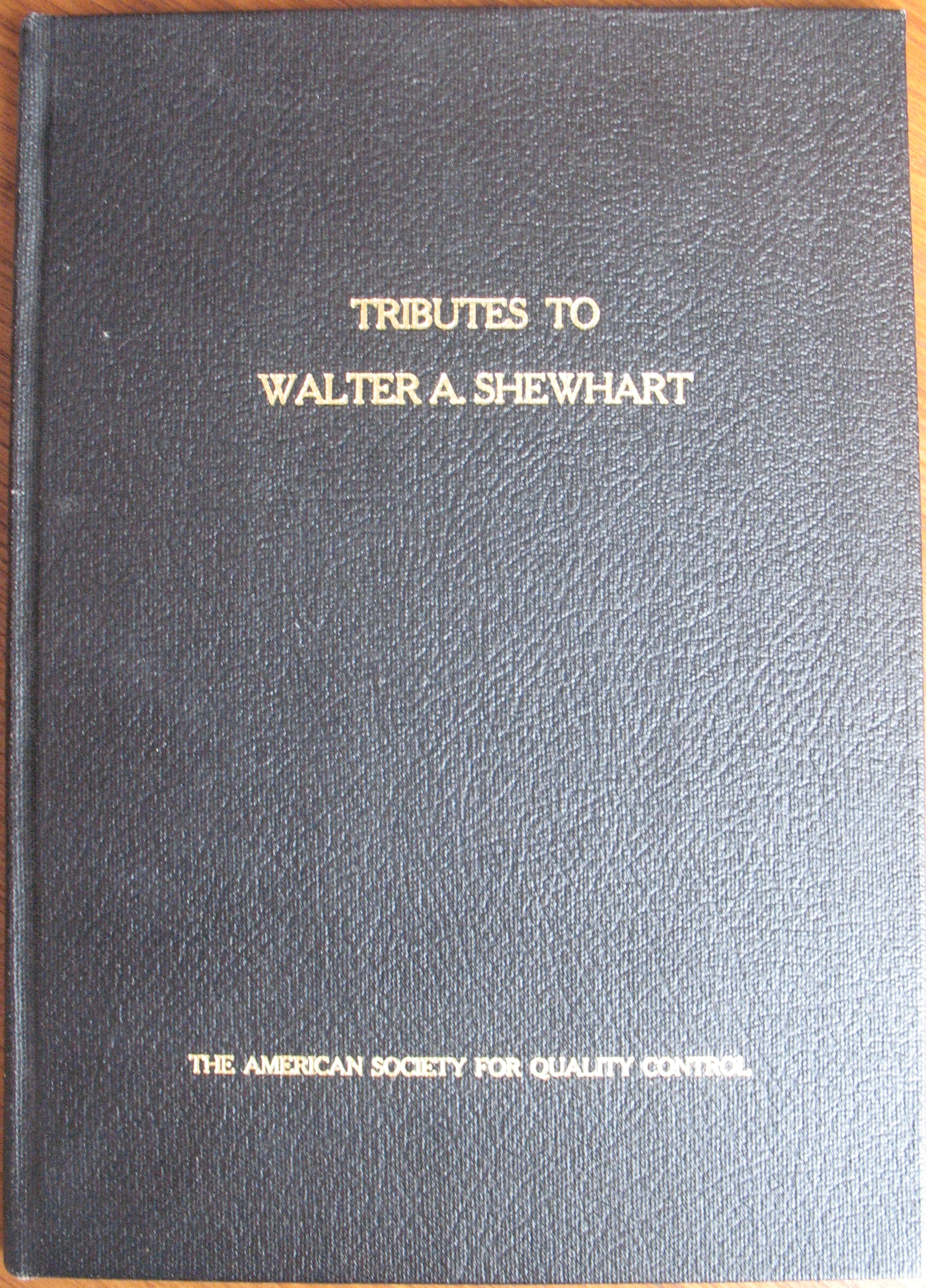 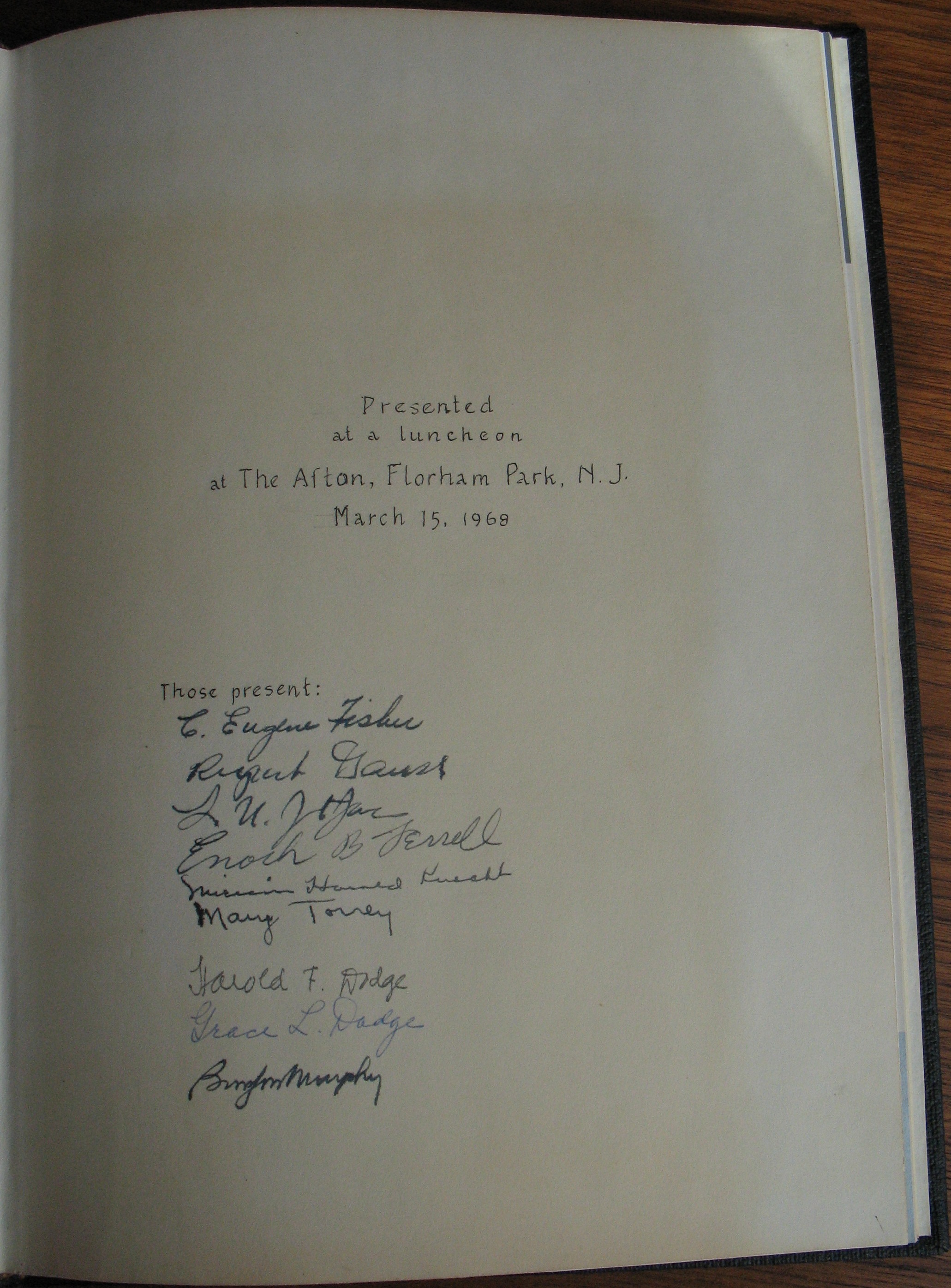 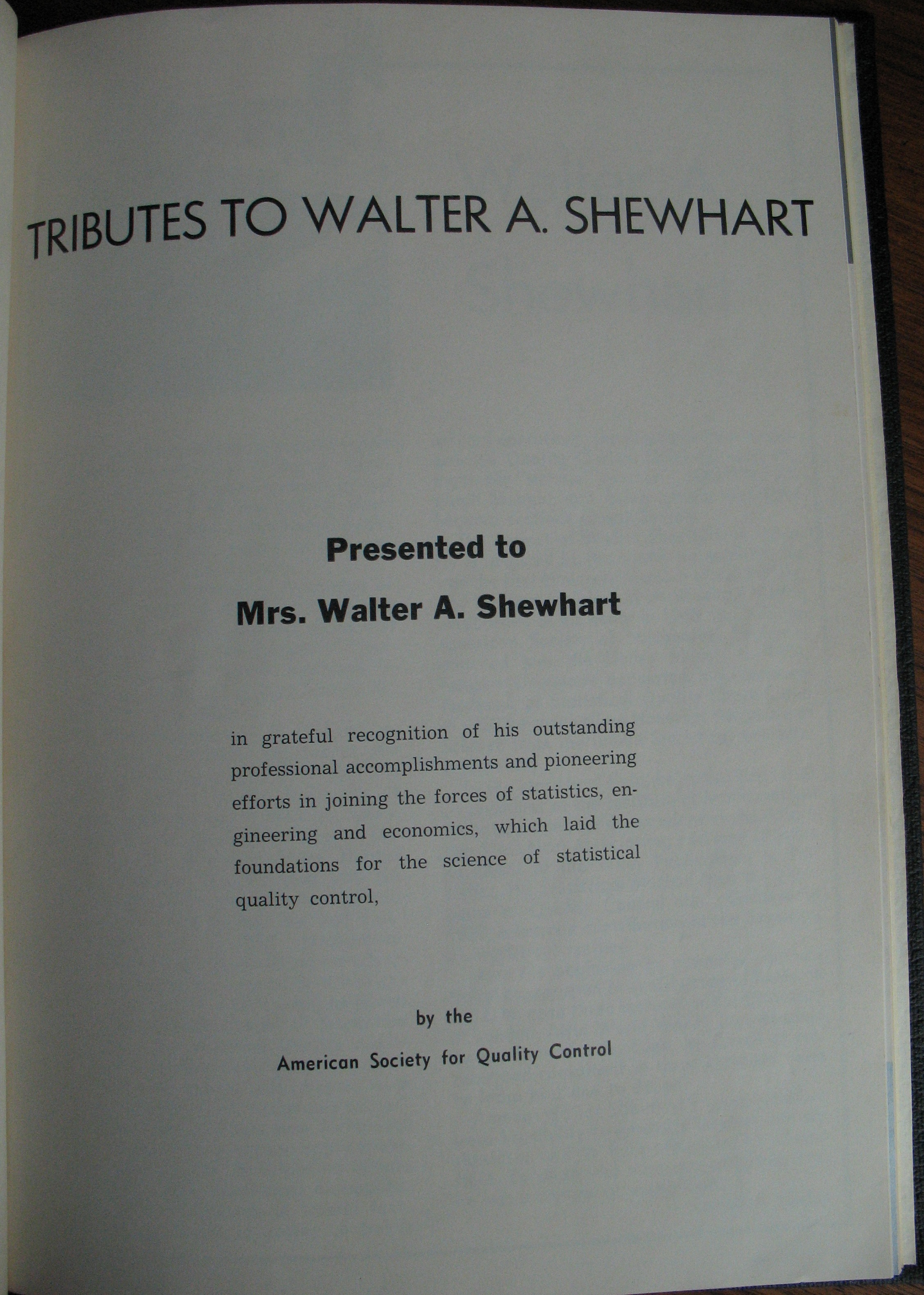 Tributes to Walter A. Shewhart 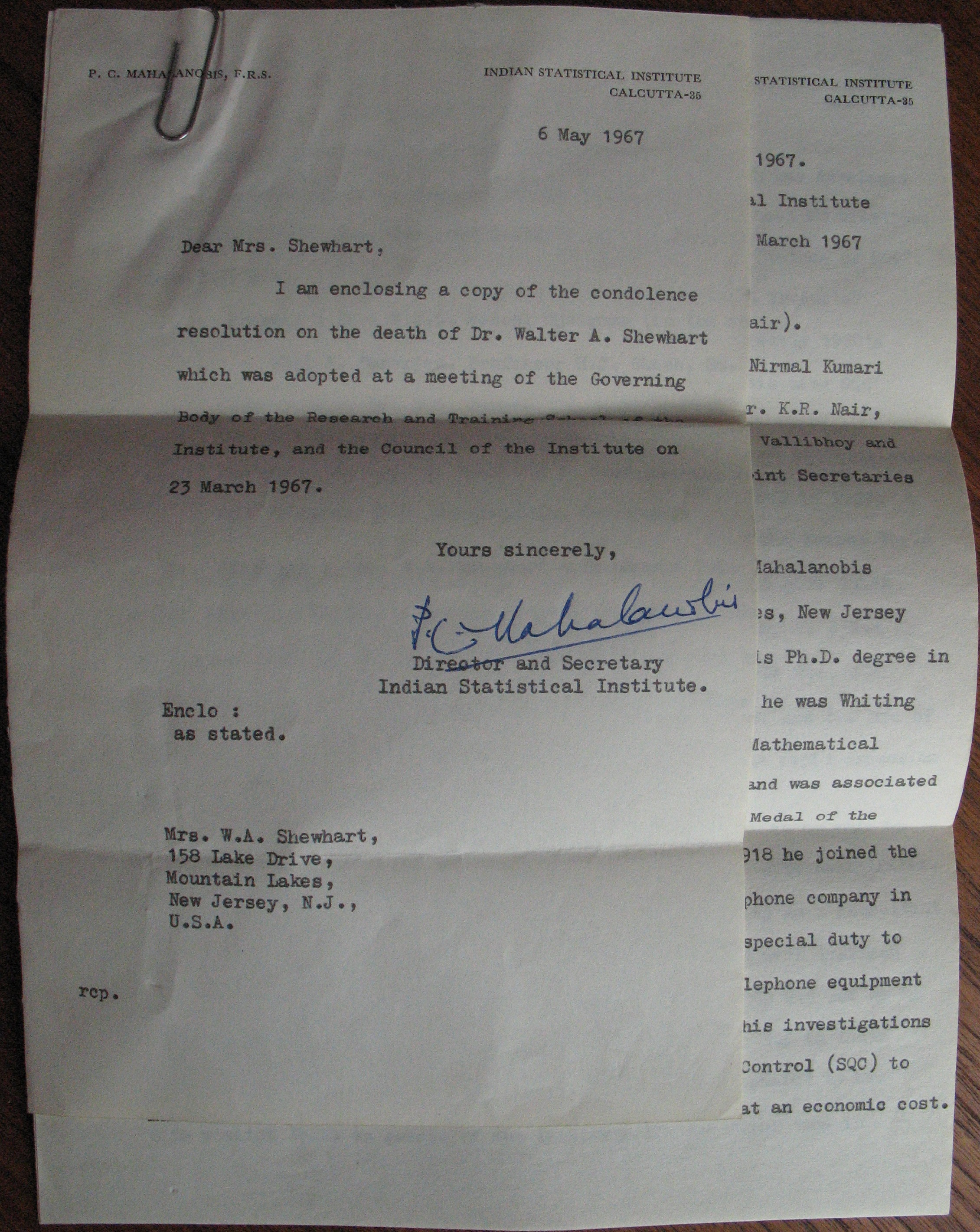 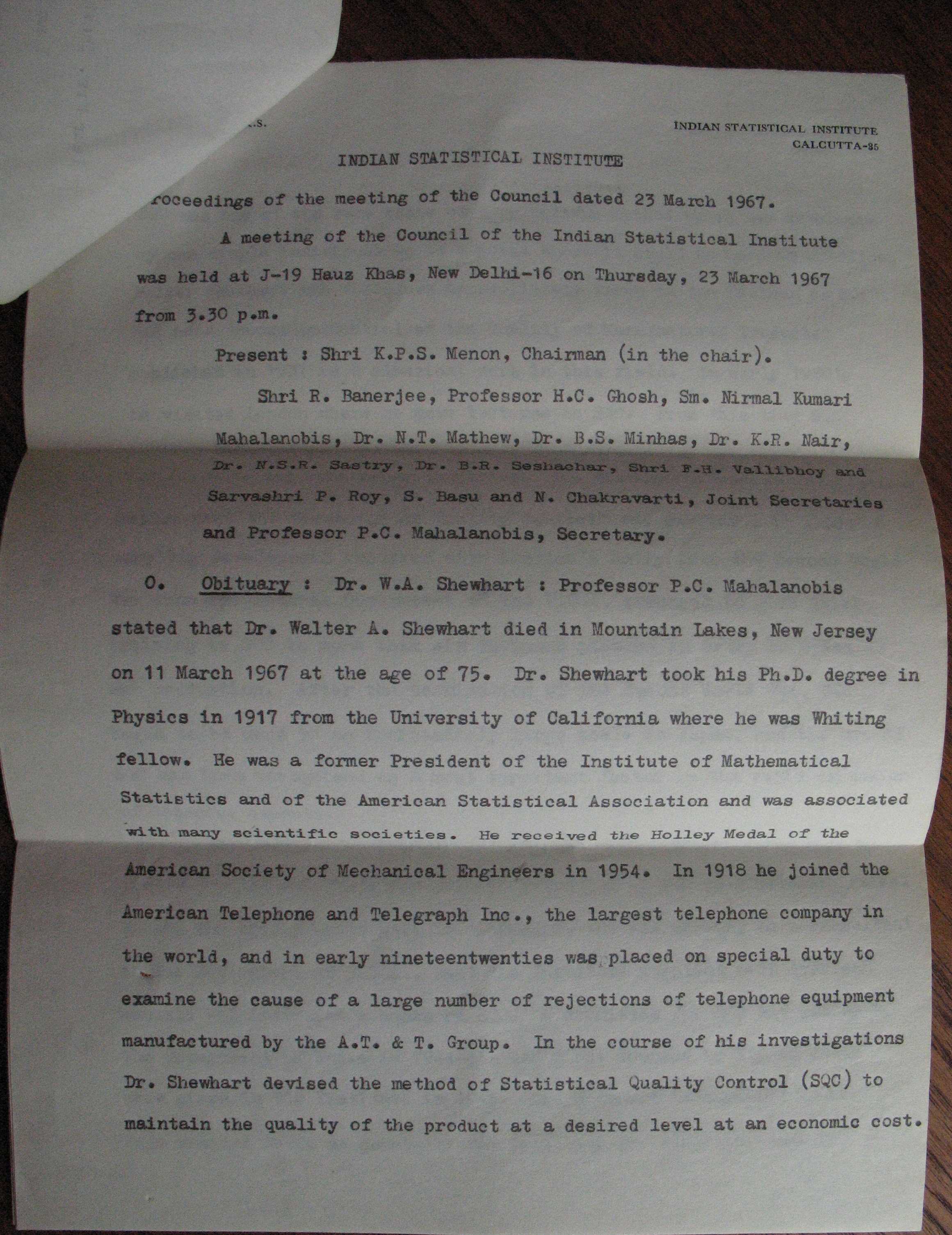 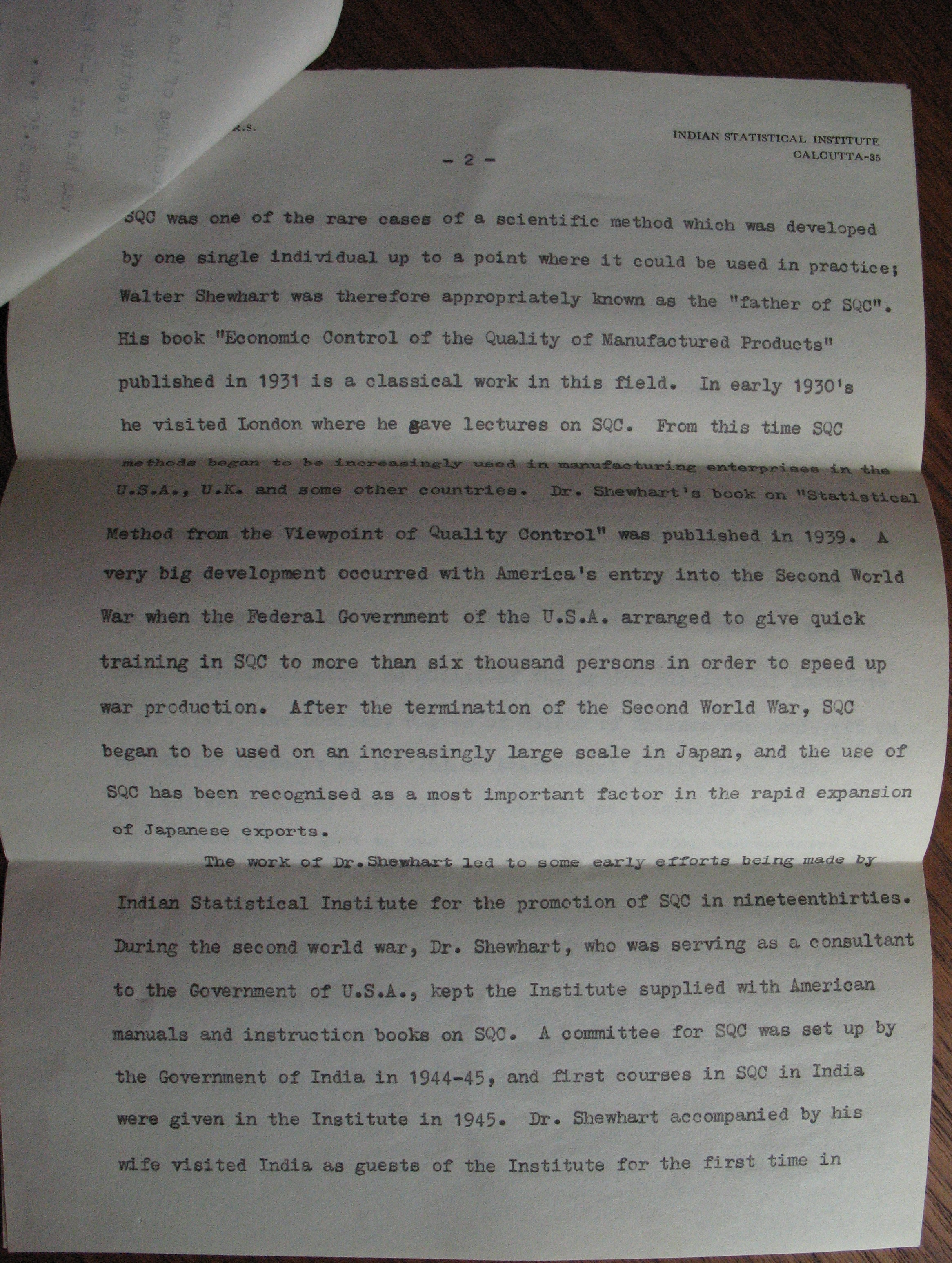 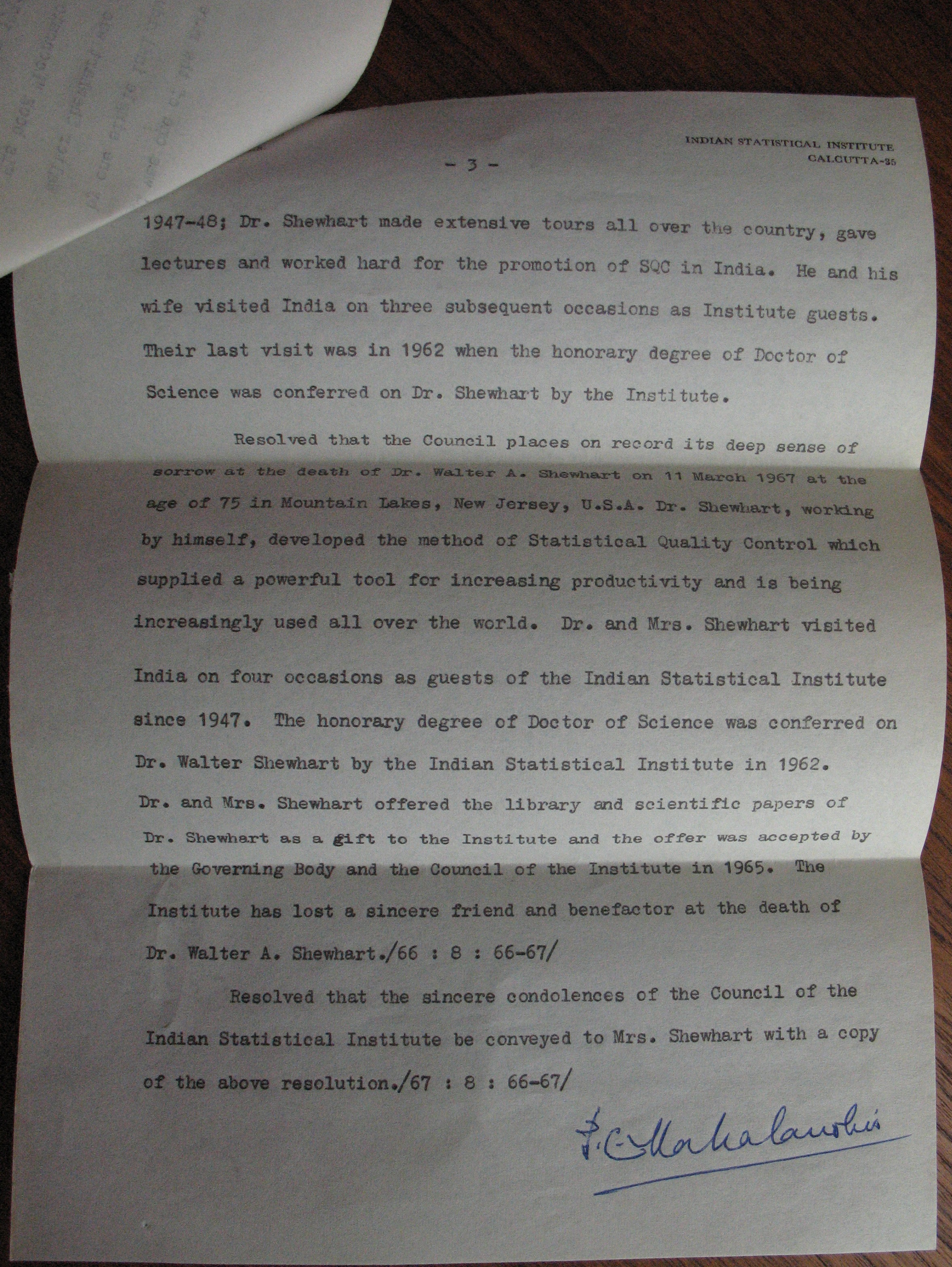 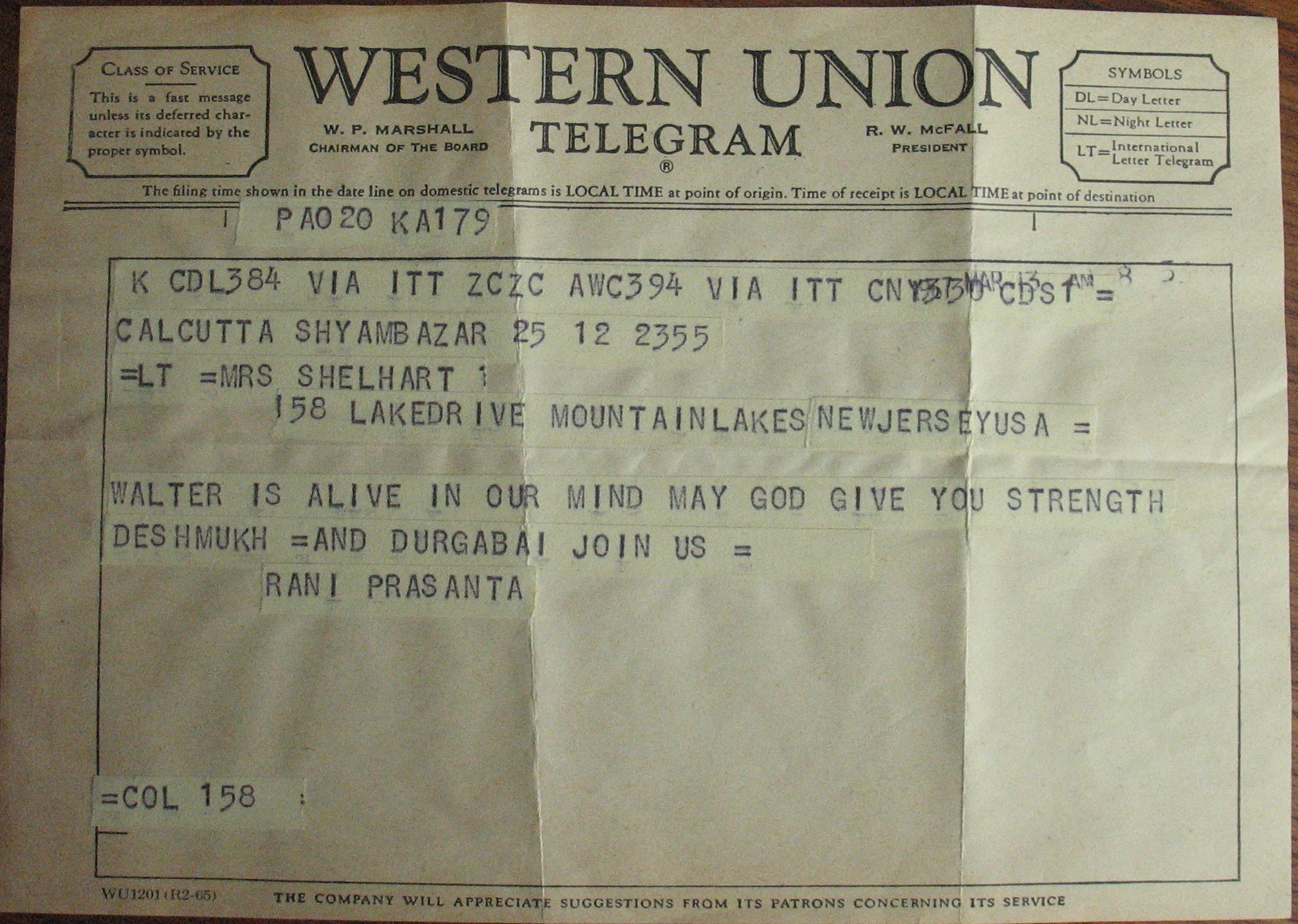 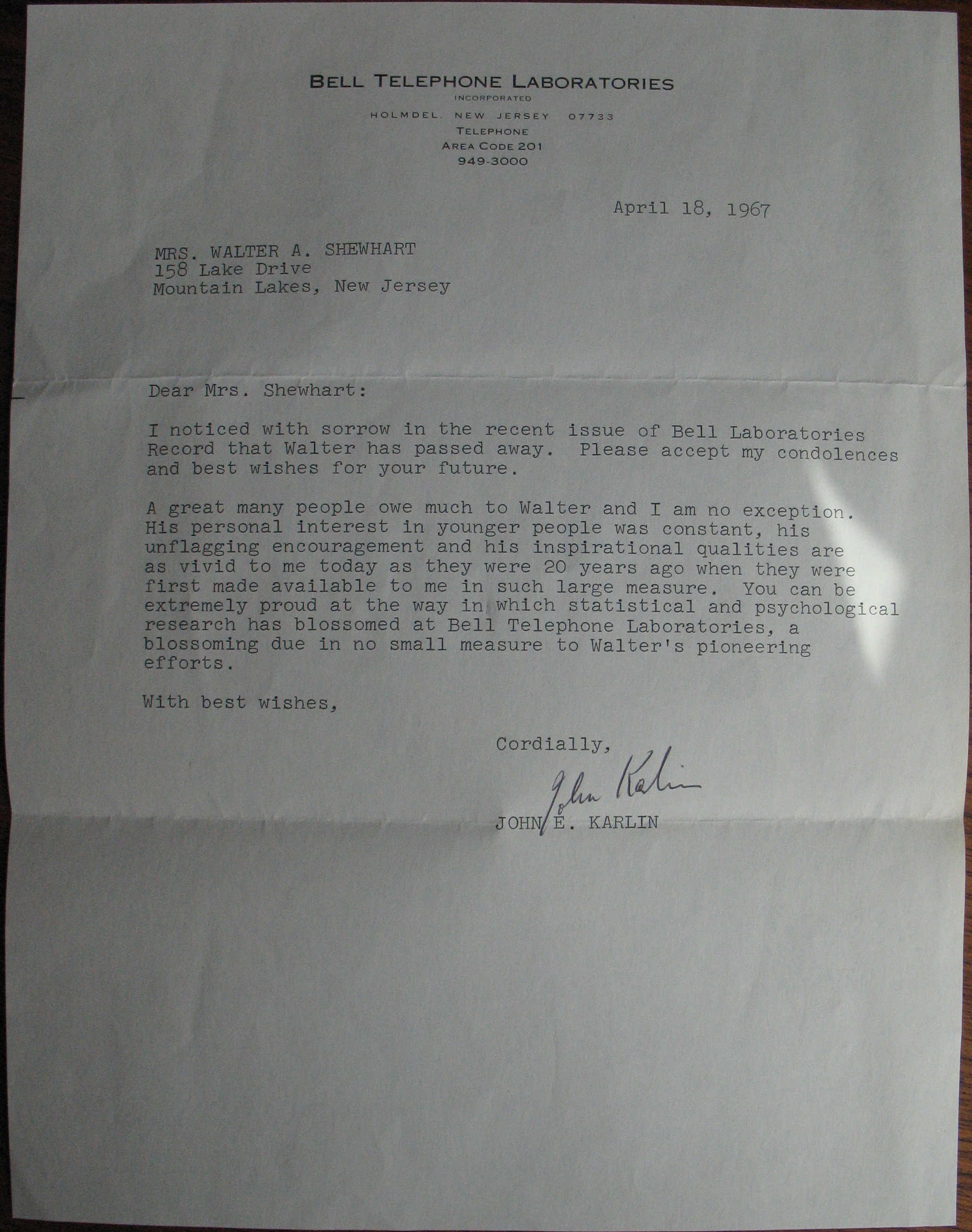 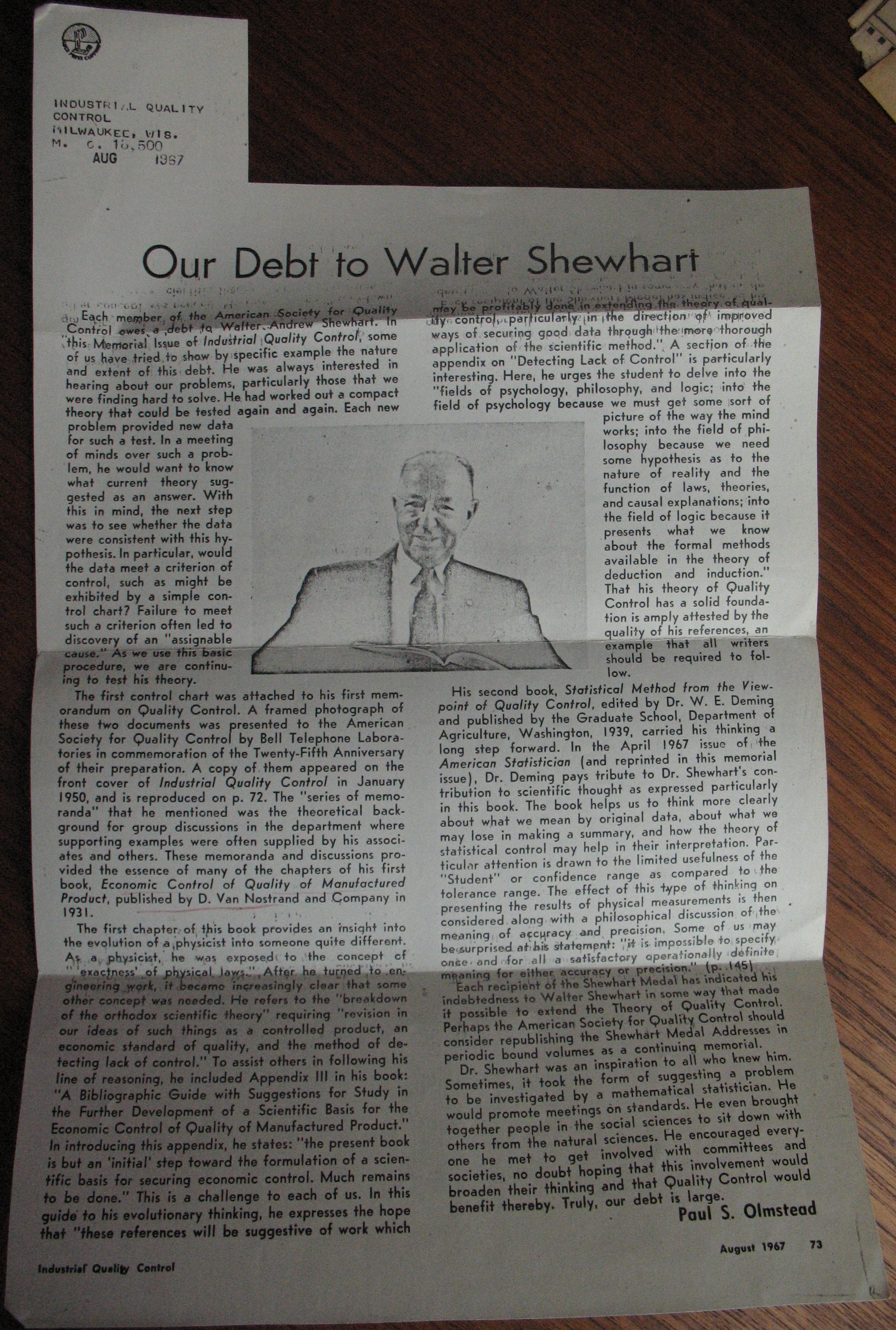 Pictures courtesy of Darin and Erin.