The Monty Hall (or Let's Make a Deal) Problem

I can barely remember when this math problem hit the papers in 1991 in Parade's "Ask Marilyn" (of the vos Savant IQ fame) column. Even after much time there were still doubts of the correct answer to the problem, even by some mathematicians! Too bad I was only 11 years old at the time and more interested in Transformers than mathematics, or maybe I would have submitted an answer. This paper is my answer.

This famous math problem was derived from a game show called Let's Make a Deal. The contestant would get to choose one of the three closed doors in hopes of getting a prize (usually a car). After the contestant chose a door, the host would open one of the two remaining doors, which would reveal a goat (which was NOT a desired prize!). The contestant would then be asked if he/she wanted to stay with the door they chose originally, or switch to the other one. The contestant was faced with a tough decision, a decision which equated to the difference between driving a shiny new car, or a smelly old goat! Should the contestant switch, or stay with their original choice? That is the problem (called the Monty Hall problem, or the Let's Make a Deal problem), and it is deceptive! Most people, upon first hearing this problem, would say that it doesn't matter, because you have 1/3 chance of winning the prize because you choose one out of three doors. However, these people aren't looking into the problem on a deeper level. Just because you choose one from three doesn't guarantee a 1/3 probability of winning the prize, especially since the host has already showed you what is behind one of the doors!

To answer this question we need some mathematics, specifically a handful of methods from probability theory. What we will do is mathematically list all the different possible outcomes of the game.

Let's first consider the situation where the contestant does not switch doors. For convenience, we'll label the doors 1, 2, and 3. Door 1 will contain the prize, which means door 2 and 3 will contain goats. An outcome from the game can be kept track of by the 4-tuple (a,b,c,d). A 4-tuple is a fancy term for "a listed collection of 4 numbers". The letter a will be the door your initially choose, b will be the door that the host opens, c will be the door you stay with (because in this scenario we are not switching, a = c), and d will be WIN or LOSE.

Our sample space is then:

The above sample space was determined because the prize is behind door 1. Therefore,

Now, consider the case where we decide to switch doors. Because the prize is behind door 1, we only win if we switch to door 1. This yields the following sample space:

WOW! This means that if we play the game and switch doors, we are twice as likely to win than if we don't switch!

I recall watching re-runs of Let's Make a Deal and it seems that most people would not switch. I believe that is because most people irrationally think their "gut instinct" is always correct. Second, many may believe that the host is trying to trick them into switching to a door that has a goat behind it. Lastly, I'd wager that only a very small percentage of those people have had a probability class.

This problem is deceptive and fun! Actually, in the study of probability there are a lot of interesting problems. I created the following Excel file showing a simulation for this problem here. There are probably more fun simulations out there.

Also, check out these very clear demonstrations I found on Twitter that use a tree and a truth table:

Hi @VickerySec ... I attach a probability tree that may explain why you are getting confused. You are right that you win the car 50% of the time, overall. However, if you switched at any point, then you have a 2/3 chance of winning the car. @statstwitbot pic.twitter.com/X0zZtMV3ge

Images reproduced below if the tweets ever go away: 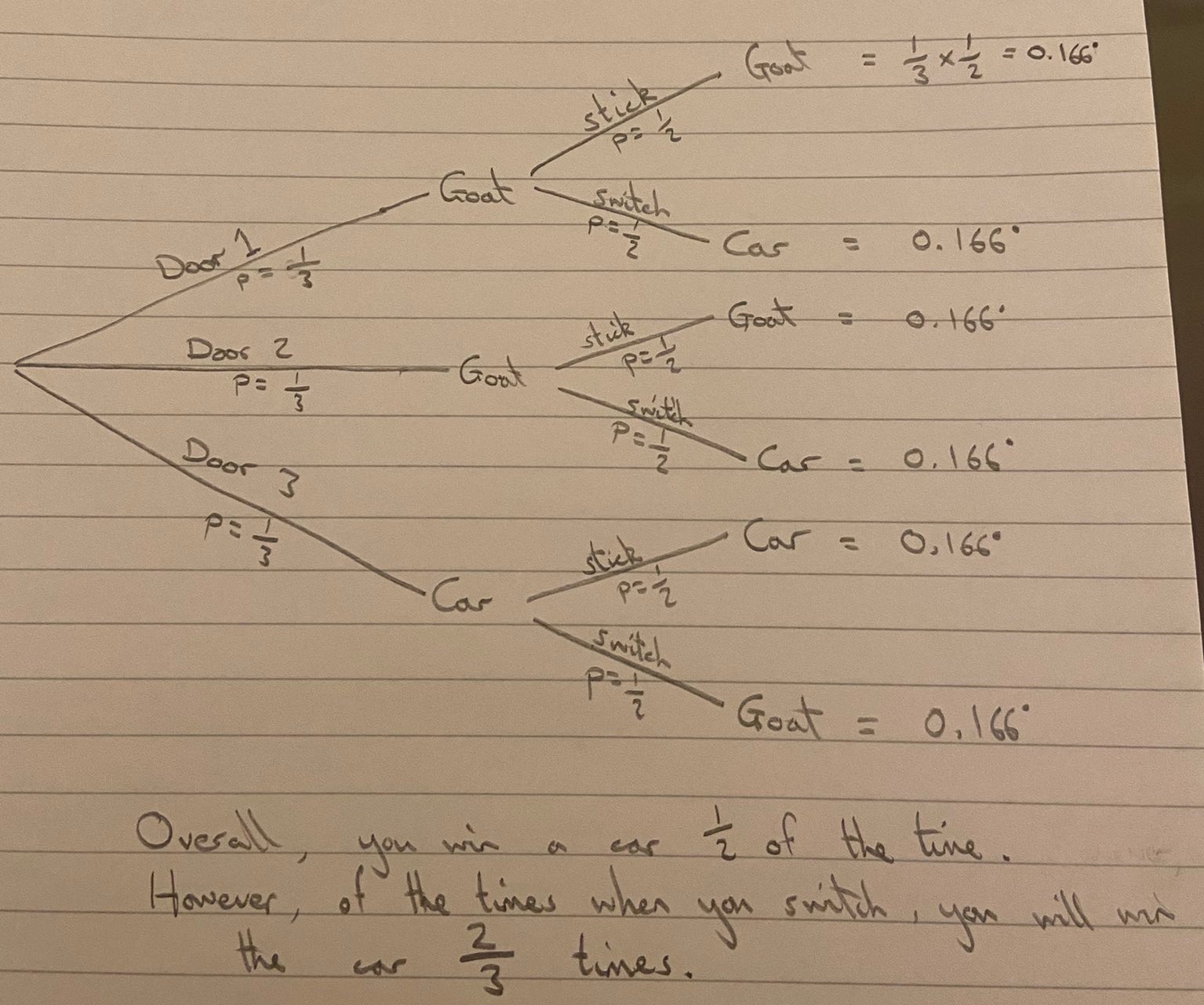 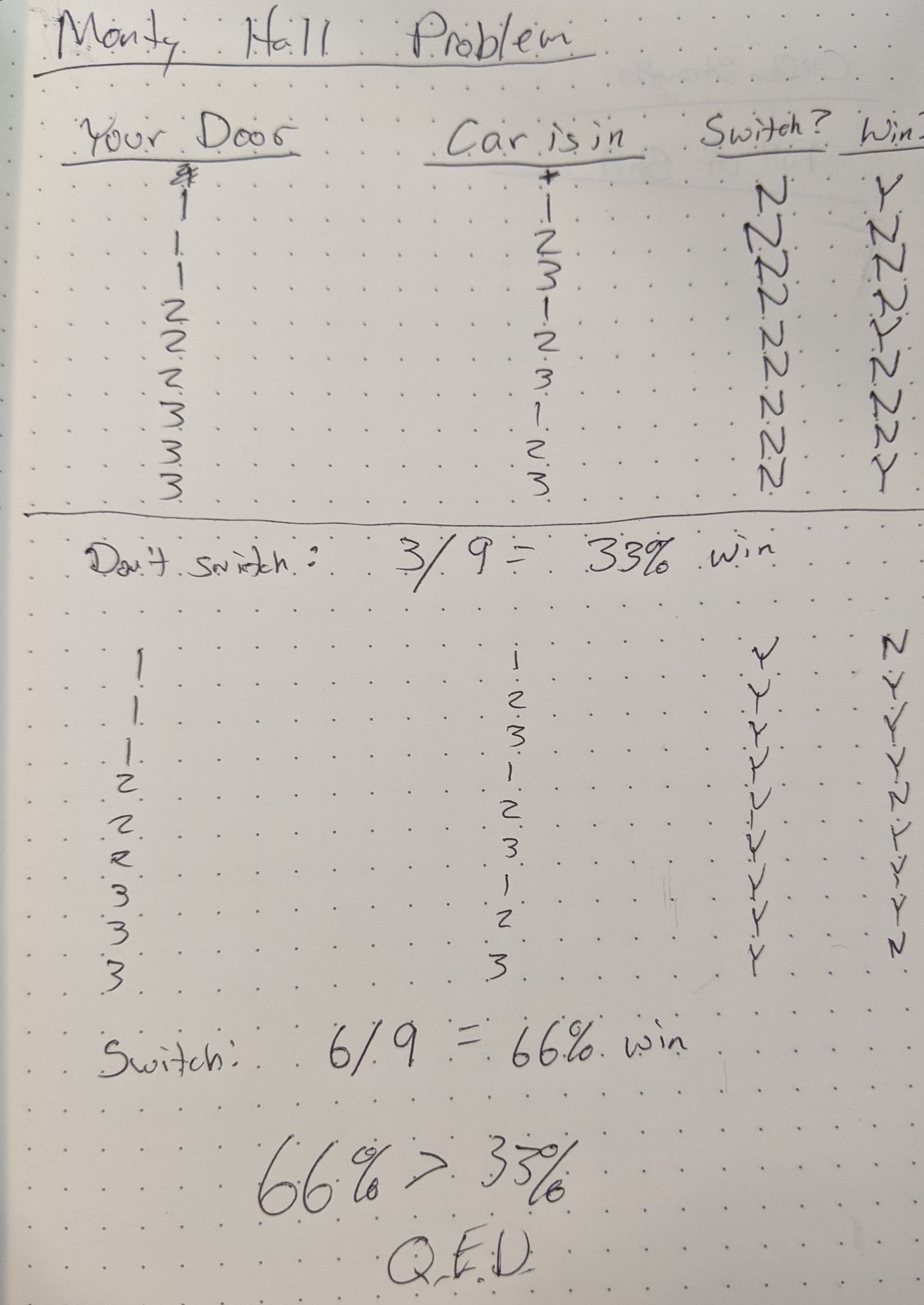