There were some interesting statistical analyses done by those seeking to overturn the results of the 2020 Presidental election. They all were rejected by the courts. Read the reports "Ansolabehere Report (Braynard)" and "Ansolabehere Report (Briggs)", among others, by Ansolabehere (a real expert in election statistics). Also, read INTERVENORS' MOTION TO EXCLUDE TESTIMONY OF SHIVA AYYADURAI, RUSSELL JAMES RAMSLAND, JR., MATTHEW BRAYNARD, WILLIAM M. BRIGGS, RONALD WATKINS, BENJAMIN A. OVERHOLT, ERIC QUINNELL, S. STANLEY YOUNG, AND "SPYDER". 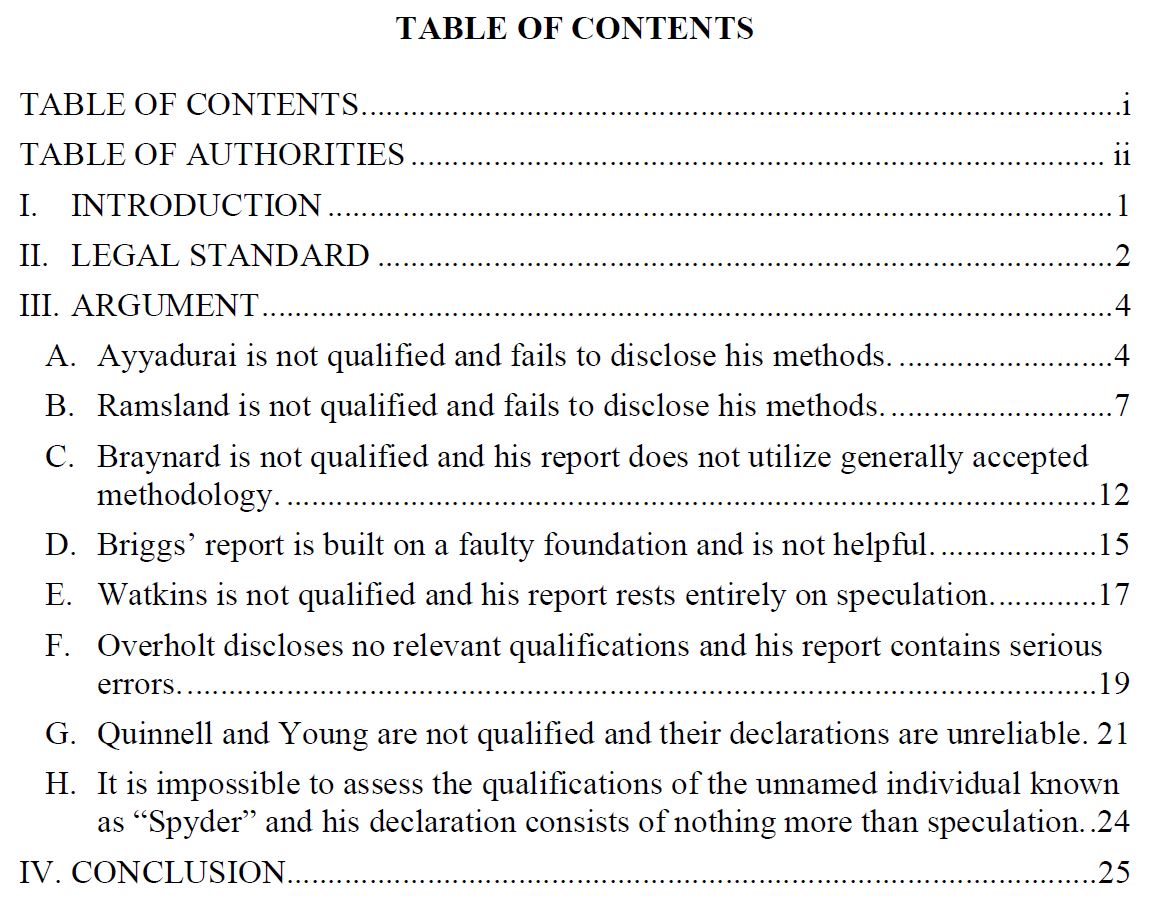 From the analyses themselves and commentary from real experts about the analyses, the main flaws I see in the analyses done by those seeking to overturn the results of the 2020 Presidental election are two-fold.

First, just because data were gathered in some fashion and numbers were computed, that doesn't mean the conclusions are warranted. Methodology is very important! Put another way, garbage in = garbage out (GIGO). And there were a lot of methodological issues: little transparency, extremely low response rates, logical blunders, confusing outliers with purposeful fraud, avoiding use of widely accepted standard statistical analyses (such as hypothesis tests and confidence intervals), not accounting for the simplest explanation of Biden receiving more votes (especially mail-ins), and others.

Second, a reality is that basic qualifications are important. Now, I am not committing a logical fallacy of saying "if you do not have educational or professional qualifications, then your argument is wrong". What I am saying, is that most likely your argument is wrong (which will need to be checked) because you do not have expertise or knowledge in the field in question. For example, just because you have a PhD in Engineering or even Statistics does not automatically mean you are an expert in anything about survey statistics or election statistics, no matter if you are being touted as an expert. On the other hand, even if you have no degree, but have worked in elections for 20 years, you probably do have the necessary experience. I was frankly underwhelmed by the experts' qualifications. In my opinion, the experts cited had far less relevant experience and knowledge than required to make an informed assessment. 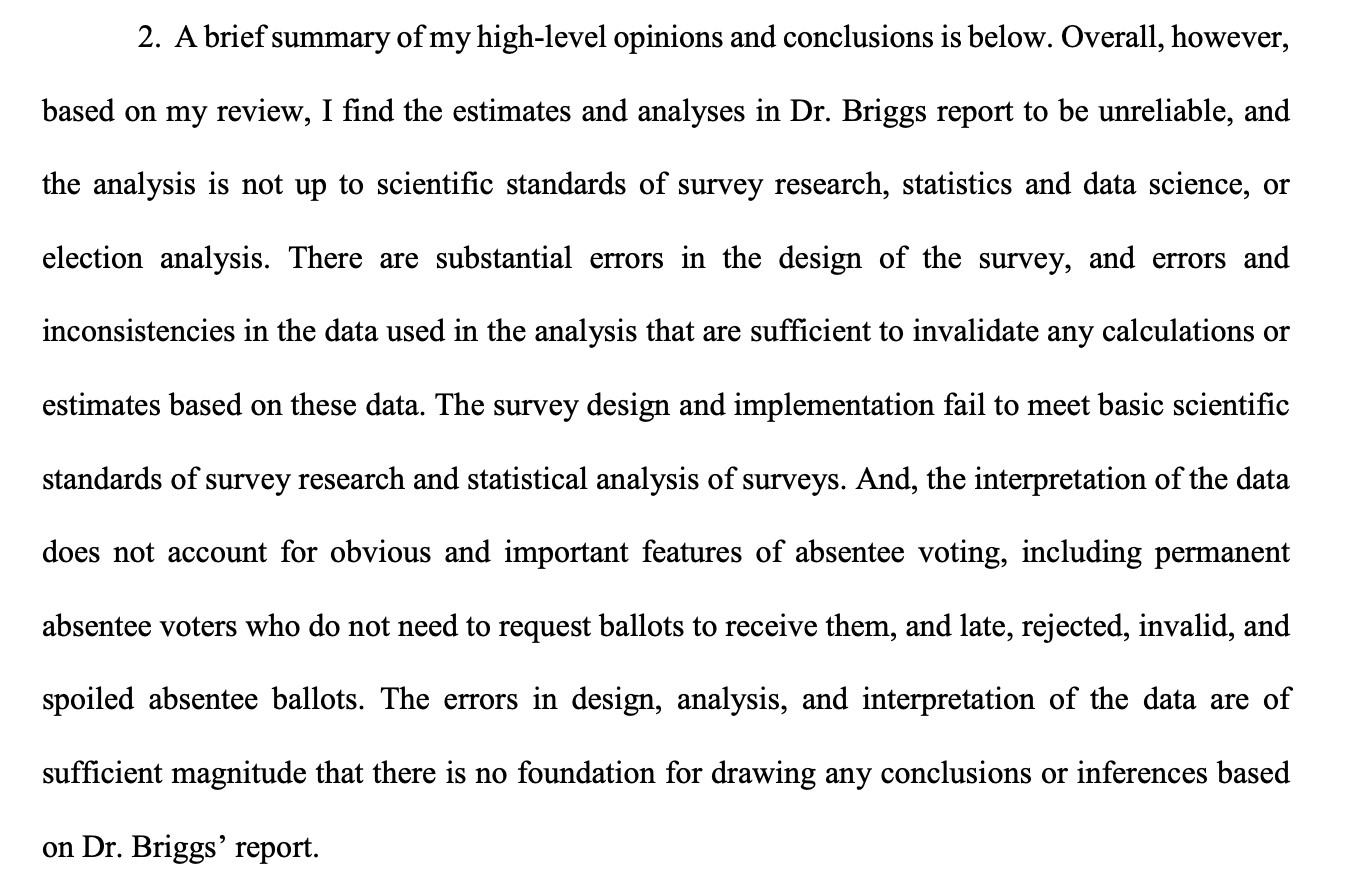 Also, consider several embarrassing "analyses" like this that I've come across 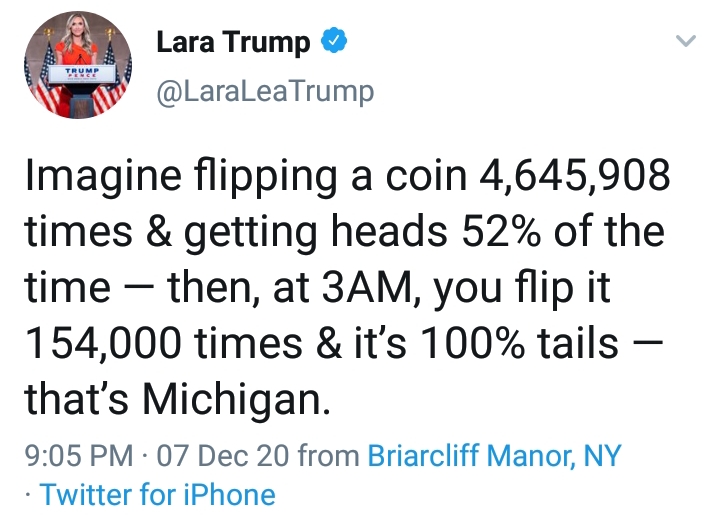 These type of analyses are beyond flawed. Elections are not like coin flips whatsoever. For example, Trump strongly discouraged mail-ins to his followers, and Biden encouraged his own followers to use mail-ins considering we are in the middle of an epidemic.

I'm happy to see the recent court rejection of the many erroneous statistical analyses of election results by those seeking to overturn the 2020 election. The analyses were an insult to the voters, our mainly fair systems, and also insulting and damaging to the statistics profession. Professional statisticians should be more forceful in calling out the numerical nonsense from those that align themselves with a conspiracy campaign. In my opinion, Dominion and Smartmatic lawyers should not only bring legal action to any news channel and lawyer making defamatory statements (see Re: Defamatory Falsehoods About Dominion), but also to any expert that made defamatory statements based on their flawed analysis.

There was a deadly riot at the Capitol building in Washington, DC. The most powerful man in the world, and his lawyers and other supporters, endlessly repeated baseless claims of election fraud, as they have done for months, thus encouraging those that disagree with the election result to "take back" their country from the "steal" in a "trial by combat". Domestic terrorists made plans online, showed up with flex cuffs, pepper spray, noose, pipe bombs, Molotov coctails and guns in truck nearby, chants of death, and killed a police officer. Other deaths also occurred as a result of the violent mob conditions, and other crimes were committed. The amplified erroneous conclusions of analyses like these probably helped to lend support to their delusions and criminal actions. Whenever someone questioned election fraud, they could, for example, just point to analyses like these done by touted experts for their "evidence" of election fraud. And they are probably making more plans for more violence. Another update is that Powell has been sued by Dominion for defamation for over $1 Billion dollars.

Please anonymously VOTE on the content you have just read:


If you enjoyed any of my content, please consider supporting it in a variety of ways: