If you study languages, it is obviously important to be able to convert from one language to another. The same idea applies to Morse code.

I used Visual Basic in Microsoft Word to accomplish this. This way if I needed to type a longer message in Morse code, I could simply type my English text into Word, then run my macros, and just copy and paste the Morse code where I needed it.

Here is the Microsoft Word file with macros included.

I made the first macro by choosing "Record Macro", and then did a find and replace of .| for a, |:. for b, and so on. I made sure to include the numbers, as well as some punctuation. Here is what the code of the first macro looks like for a and b 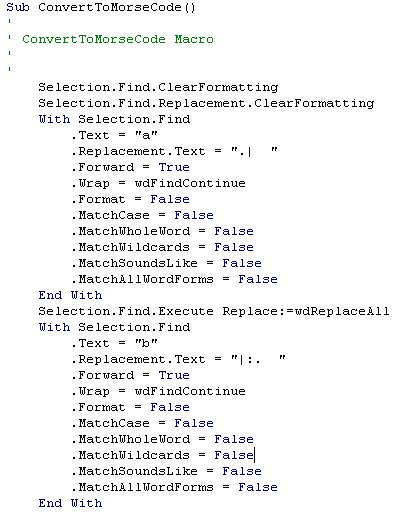 I took this a step further and also did a second macro which converts Morse code to dit-dah speak. This is a way of reading or speaking Morse code as it actually sounds, and is very helpful. For example, hello is ditditditdit dit ditdahditdit ditdahditdit dahdahdah. Here is the entire macro to accomplish this second conversion

Feel free to add anything to these macros, since I definitely did not cover all possible punctuation. I also did not make macros for converting back to the standard alphabet.