Around 1946, von Neumann, Fermi, and Ulam had the idea for the Monte Carlo method. Ulam recounts:

"The first thoughts and attempts I made to practice [the Monte Carlo Method] were suggested by a question which occurred to me in 1946 as I was convalescing from an illness and playing solitaires. The question was what are the chances that a Canfield solitaire laid out with 52 cards will come out successfully? After spending a lot of time trying to estimate them by pure combinatorial calculations, I wondered whether a more practical method than "abstract thinking" might not be to lay it out say one hundred times and simply observe and count the number of successful plays. This was already possible to envisage with the beginning of the new era of fast computers, and I immediately thought of problems of neutron diffusion and other questions of mathematical physics, and more generally how to change processes described by certain differential equations into an equivalent form interpretable as a succession of random operations. Later [in 1946, I] described the idea to John von Neumann, and we began to plan actual calculations".
(from Eckhardt, Roger (1987). Stan Ulam, John von Neumann, and the Monte Carlo method, Los Alamos Science, Special Issue (15), 131-137)

Consider a basic problem of calculus, that of finding the area, A, underneath a curve on an interval [a,b]. This is represented by the definite integral

This integral can be approximated by a sum, such as

This approximation is quite useful for complicated f(x), and it is called a Riemann sum. It amounts to partitioning the interval [a,b] into subintervals, choosing which xi to evaluate in the subintervals, and approximating the area underneath the curve (which can be difficult) by the sum of the areas of more and more rectangles which get thinner and thinner. The latter is easy to do because Area = Base*Height for any rectangle. 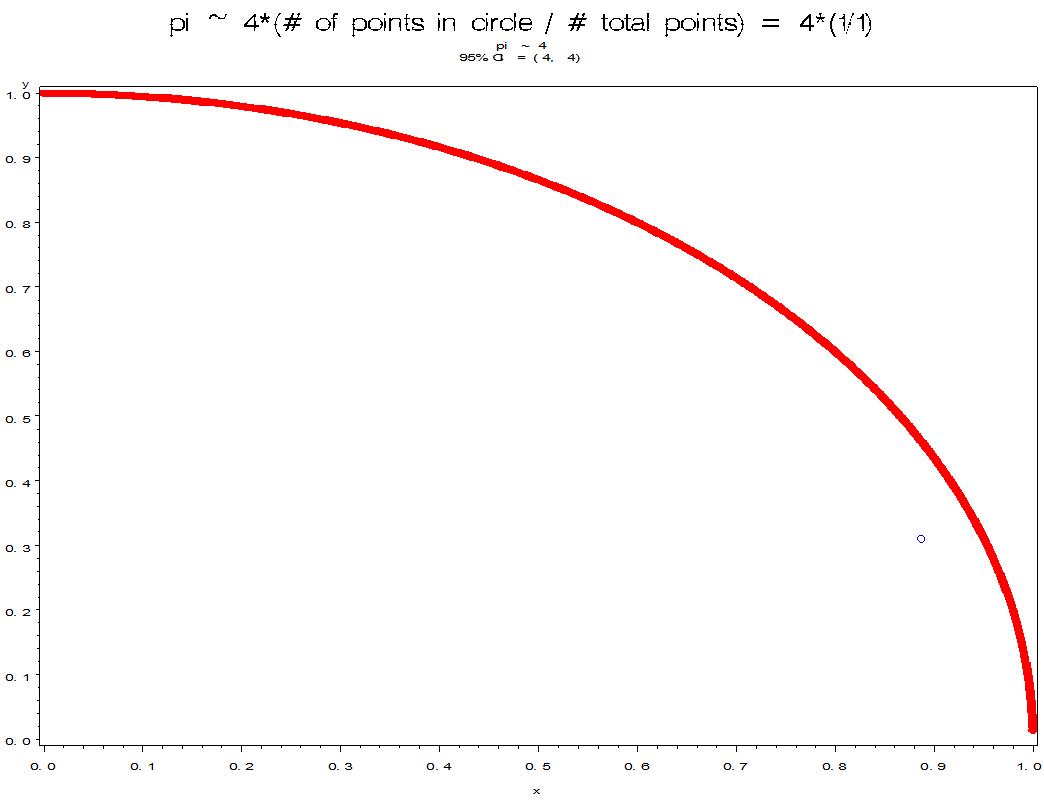 Note that 4 is not a very good estimate of pi. This is not surprising, because N is only 1. Let's throw some more points. 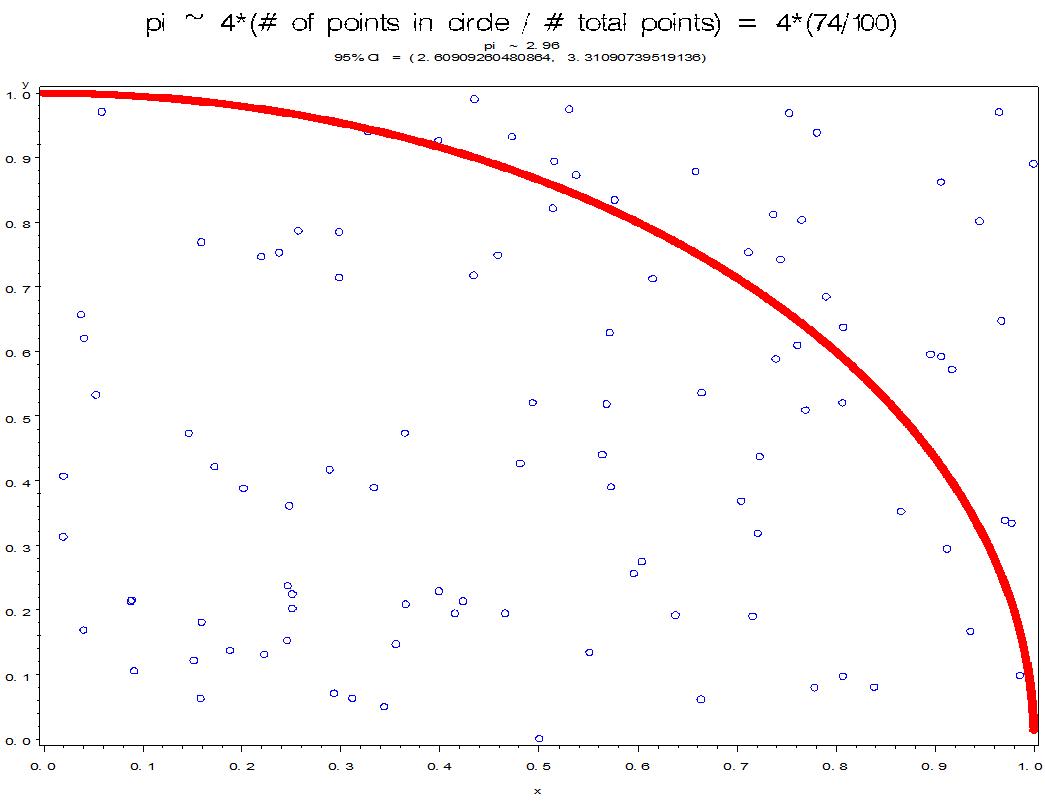 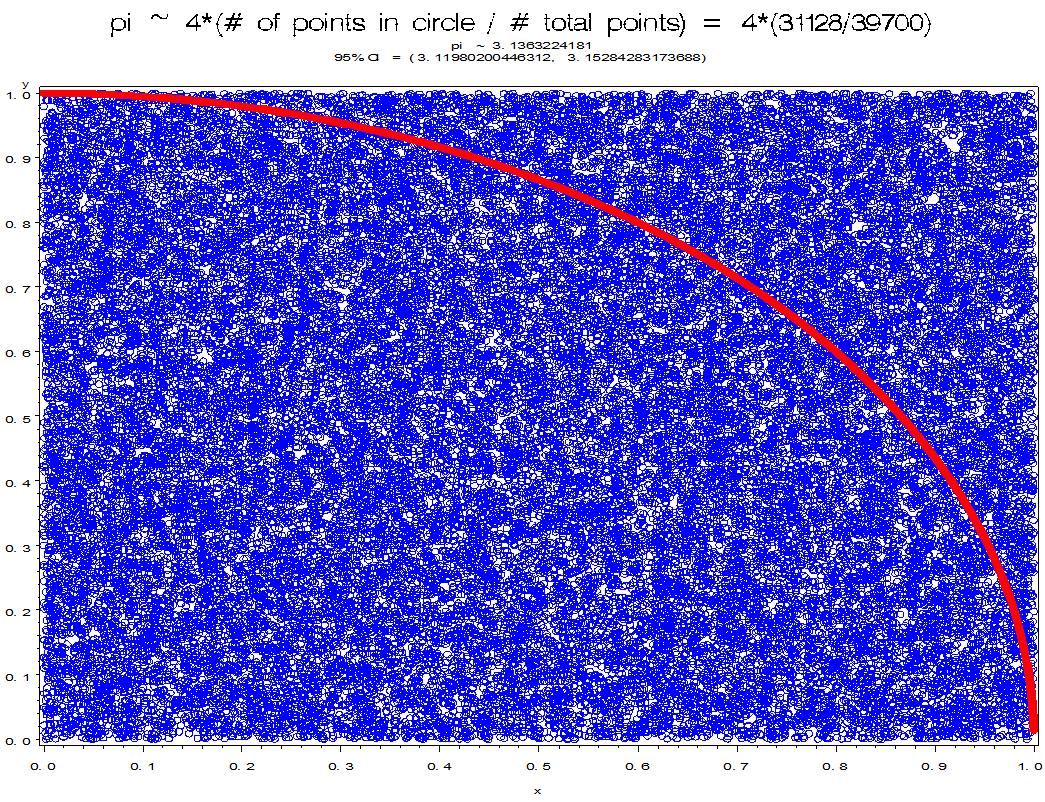 Now that you have the idea, let's use N = 1 to N = 50,000 and plot the resulting estimates of pi and a confidence interval around each estimate. 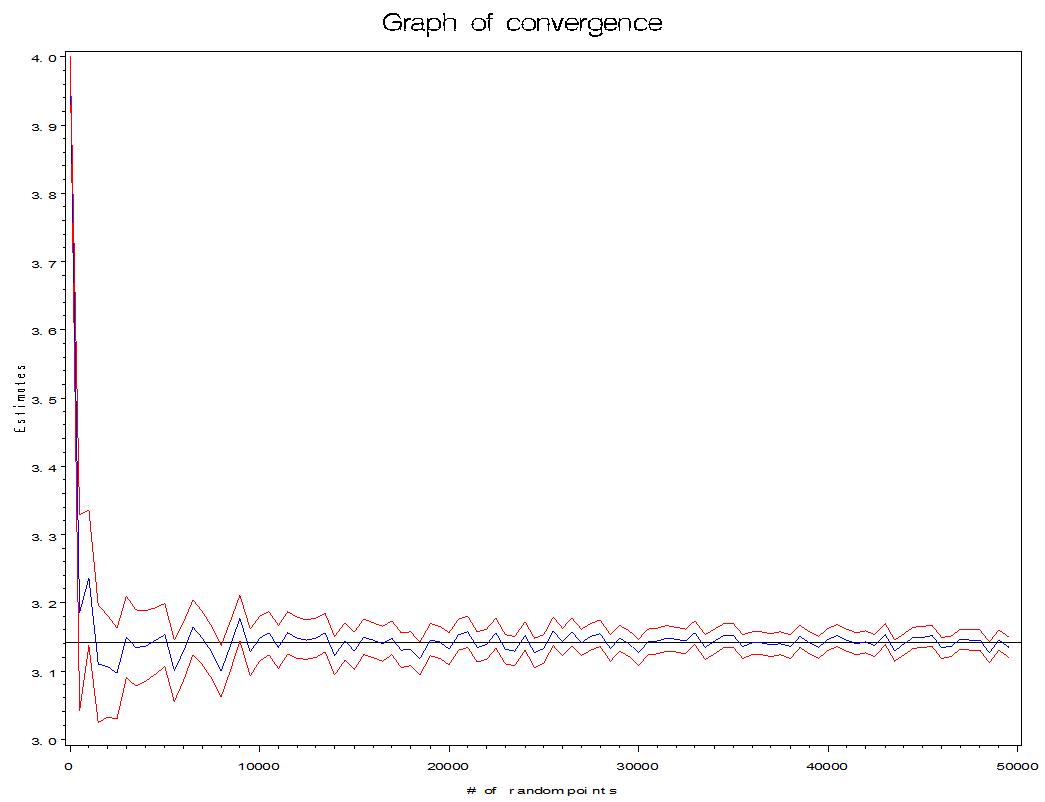 It appears that the estimates are getting closer to pi and the confidence intervals are getting narrower as N increases. In fact, the Law of Large Numbers guarantees that the MCI estimate will converge to pi as N gets larger and larger. However, because of a slow rate of convergence, improvements have been made on "crude MCI". This blog is too short to go into all the details of these improvements, but the reader can look up "Importance Sampling", "Control Variates", and "Stratified Sampling". Just note that crude MCI and the improvements arise from sampling theory and variance reduction techniques.

Who would have thought that sampling theory could be used to solve problems in areas other than Censuses and Surveys?