Here is some R code I wrote to handle something called digit preference heaping. I was following some article in 2009 when I wrote this. Of course, Murphy's Law applies, and I cannot find that article.

In any case, digit preference is the phenomenon of people reporting numbers with a certain digit. The classic example is people reporting their weight in numbers that end in 0 or 5. You weigh 173lbs? No problem, just report 170 or 175 because that "seems right".

This is, of course, a major theoretical issue. I say theoretical, because in practice, often surveys ask for, and accept, estimates from people and companies. Additionally, many different types of adjustments are often carried out on the data. Nevertheless, here is a simple way to address digit preference heaping, that is, when some numbers are "heaped" in a pile on numbers with a certain digit.

In this toy example, people will report tend to report their numbers using numbers that end with a 5. 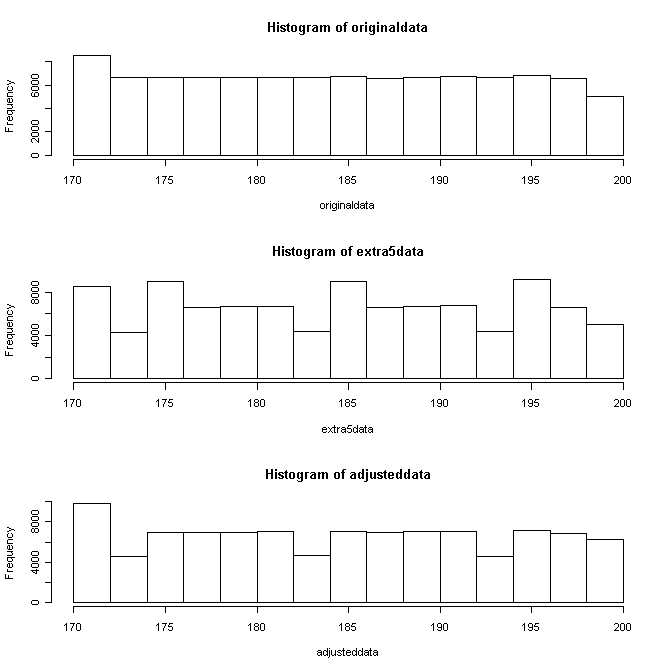 Here is my R script with comments:

#spread out these extra, probably false but maybe true, numbers ending in 5
#on average keep them around that number however, since they may be valid
adjusteddata<-extra5data
#the larger this is, the more they get spread out to either direction
parameter<-.1
for (i in 1:n)
{
#if the original measurements are thought to be too small or too large, make the
#low and up endpoints assymetric accordingly
p<-runif(1,1-parameter,1+parameter)
#spread out 40% of the numbers ending in 5
if (runif(1)>.6 && substring(adjusteddata[i],3)=="5")
{adjusteddata[i]<-round(adjusteddata[i]*p)}
}

Note that you don't want to spread out all the "extra 5 data" because obviously some of the data ending in 5 is valid. Also, note that the means of the data before and after the adjustment are generally the same. However, the more you spread out the "extra 5 data", the larger the variance will be of the "adjusted data". As mentioned, this is a simple way to think about adjusting data when it is suspected that digit preference heaping is present. Thanks for reading.