In Jason Ash's 12/5/18 article Puppy Steps, he discusses a Bayesian method for determining when the number of steps he took statistically changed. He does a Bayesian analysis to

"determine if my step behavior changed over time. Was there a specific day or range of days where my activity increased or decreased? How much did my steps change? If I observed a change, what could I attribute it to?"

In this article, I will show "frequentist" changepoint analyses that can also shed some light on these questions.

In the paper changepoint: An R Package for Changepoint Analysis by Killick and Eckley, they write

"...changepoint detection is the name given to the problem of estimating the point at which the statistical properties of a sequence of observations change."

This is a great paper for the history and mathematical details of changepoint analysis, a topic which has been studied probably since the 1950s.

First, I convinced myself the functions are working as expected by constructing a dataset to have an obvious changepoint, like so:

I used the following R packages changepoint, zoo, and changepoint.np. Changepoint has the functions cpt.mean, cpt.var, and cpt.meanvar. These check for differences in means and/or variances. The package changepoint.np is a nonparametric version. That is, it uses an empirical distribution. These packages have different functions that can use different methods, such as PELT and Binary Segmentation, as well as distributional choices (likelihoods, not priors). Note that I mostly used the defaults. Please see the documentation for details!

After I read in the simulated data and did cpt.mean, I obtained 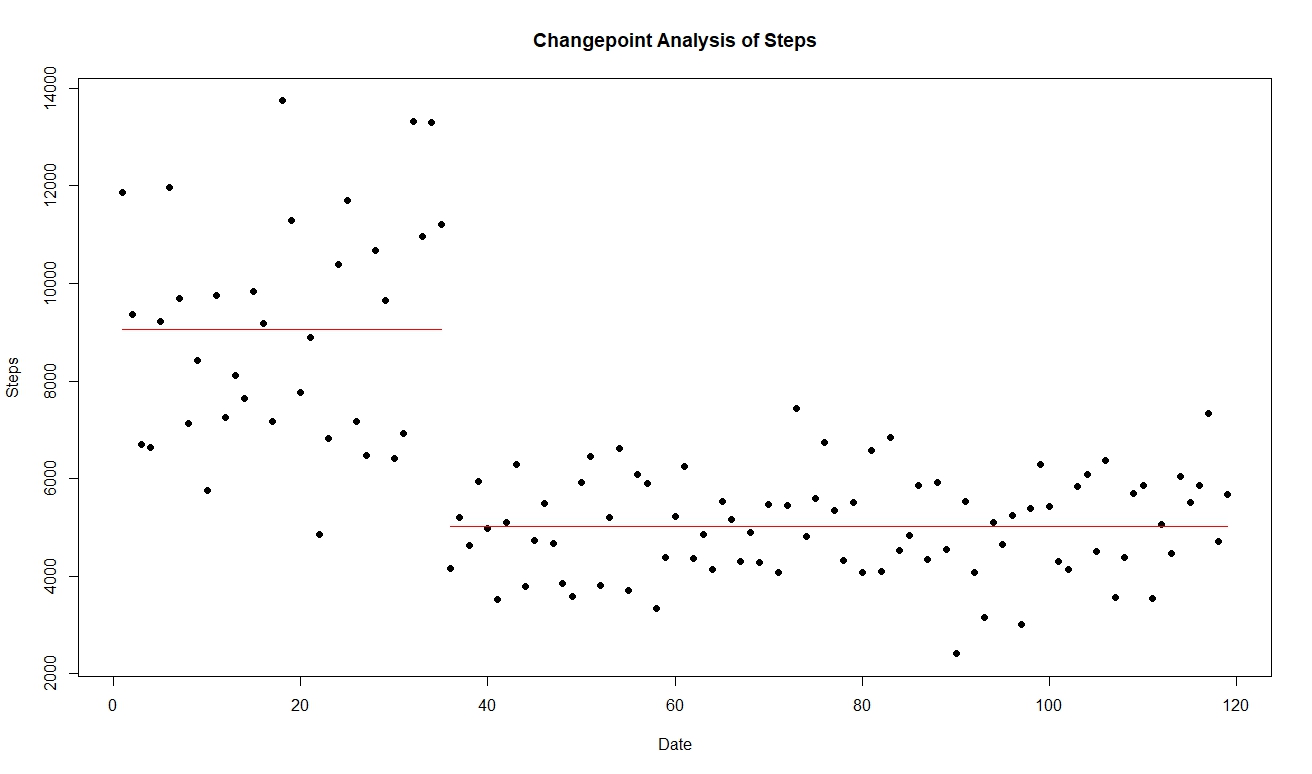 Next I did cpt.var, and I obtained 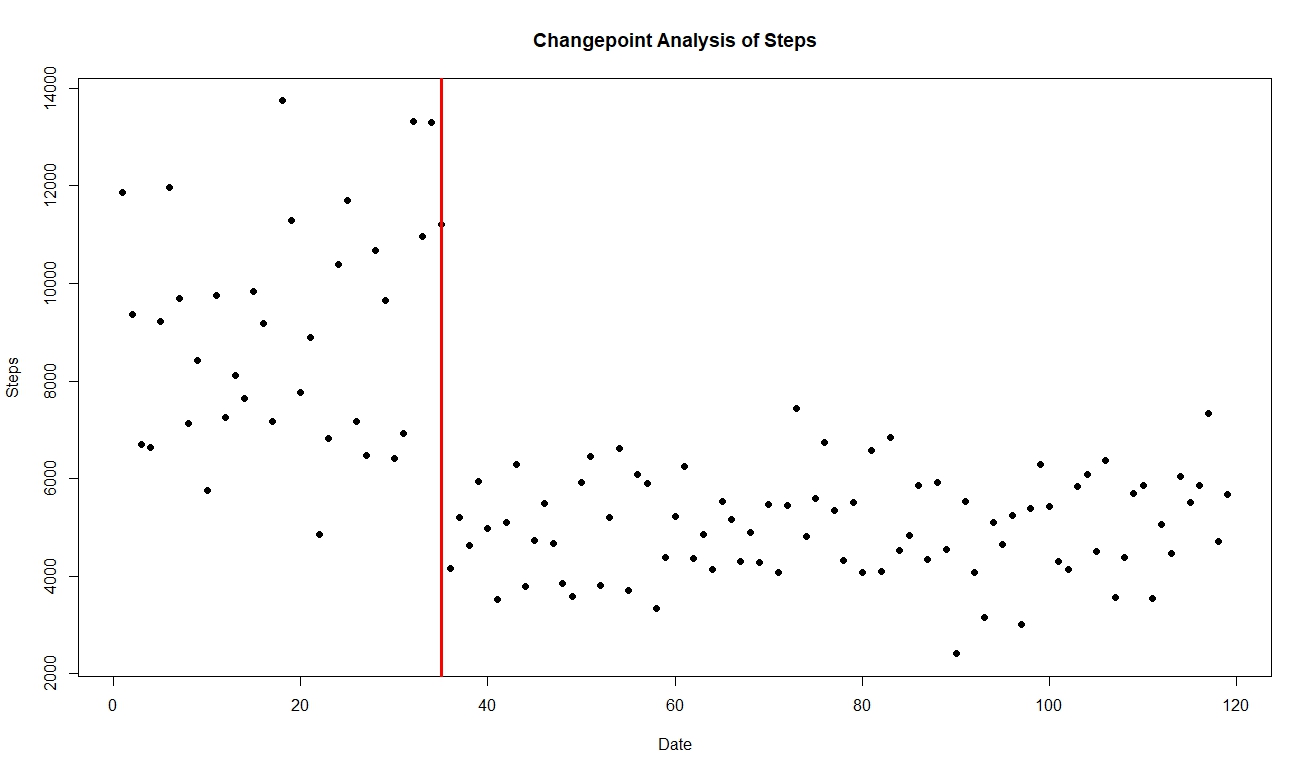 I then did cpt.meanvar, and I obtained 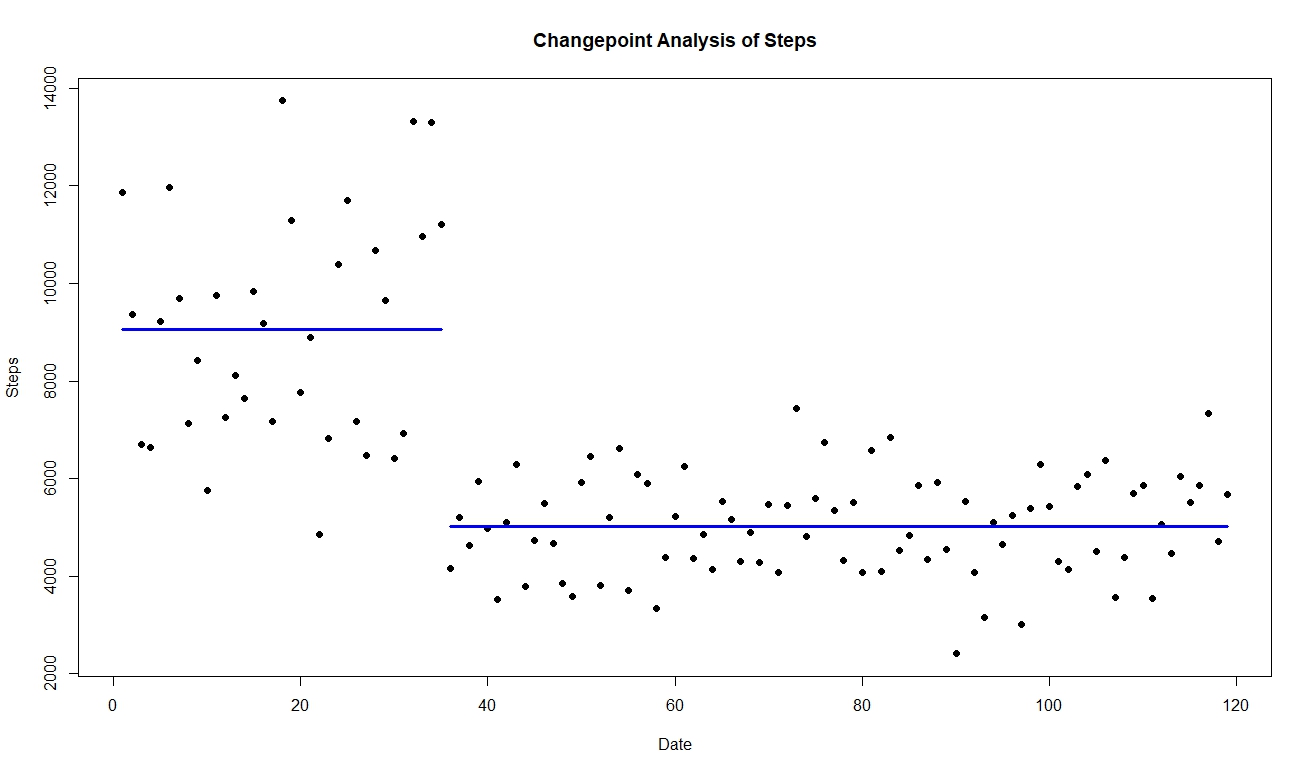 Last, I did cpt.np, which as mentioned is the nonparametric version. I obtained 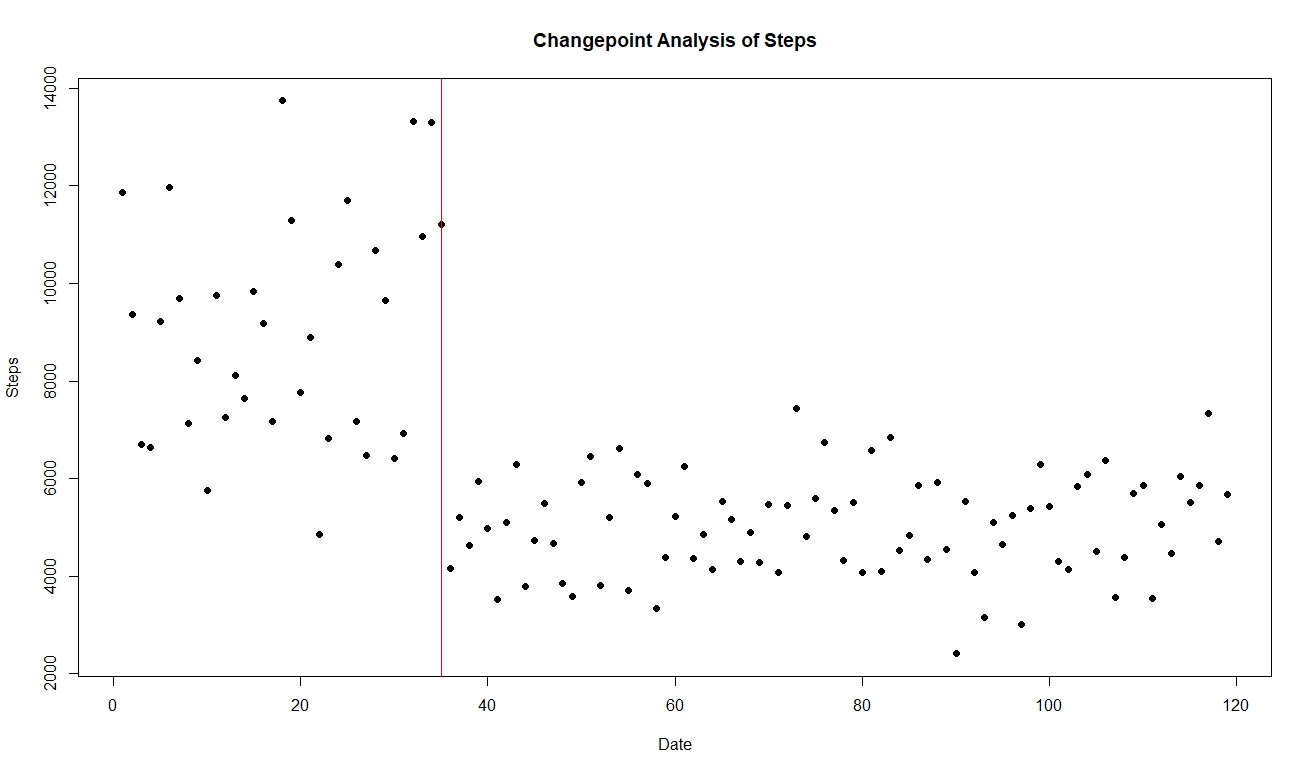 These methods most likely all chose the same changepoint because I made the means and variances of the data before and after so much different. Also, note that the changepoint functions can also be set to detect multiple changepoints.

Now that we are convinced the changepoint functions work, let's look at Ash's actual step data. 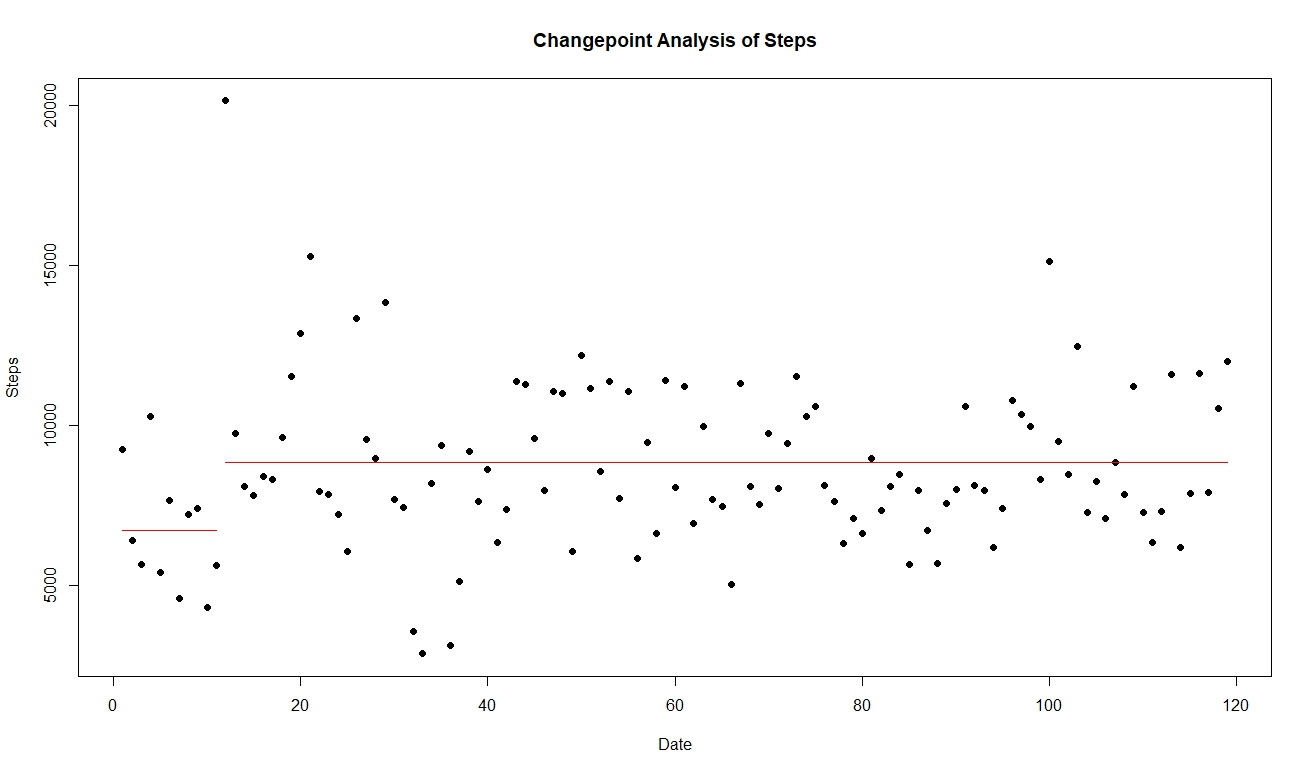 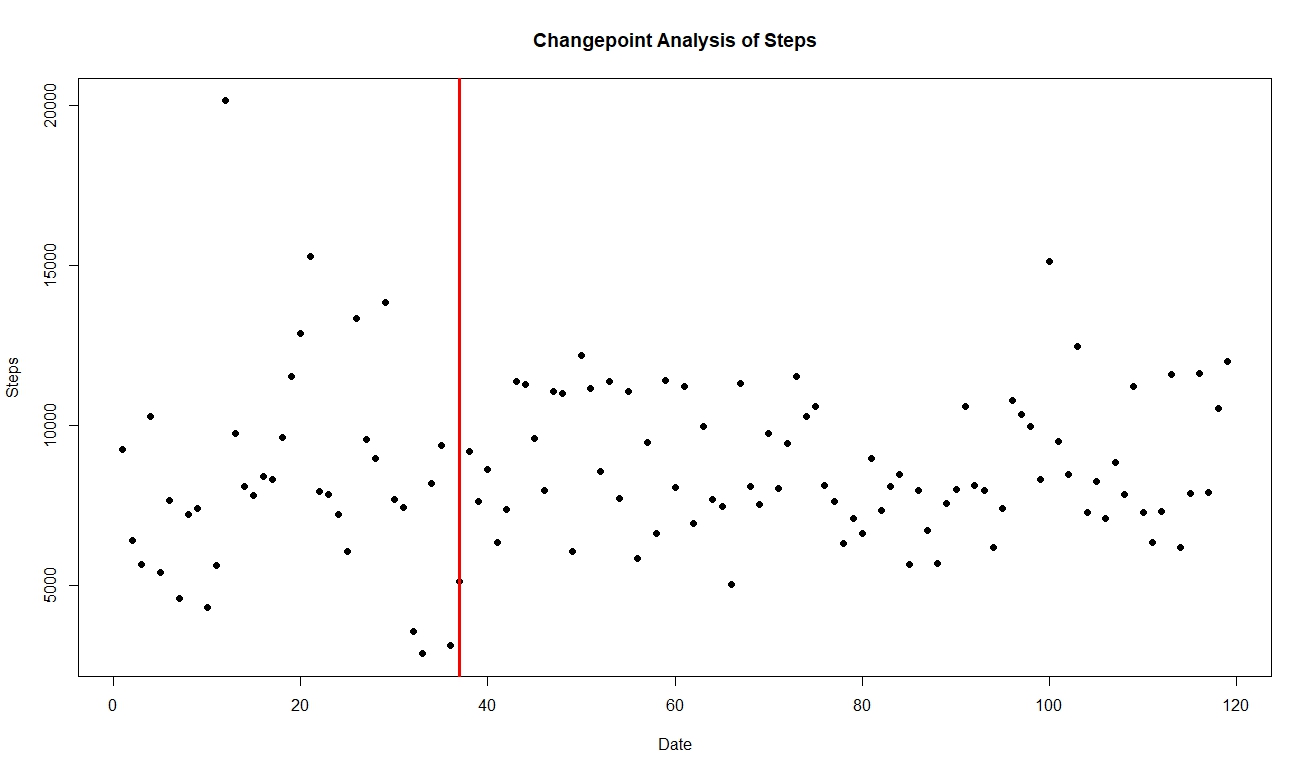 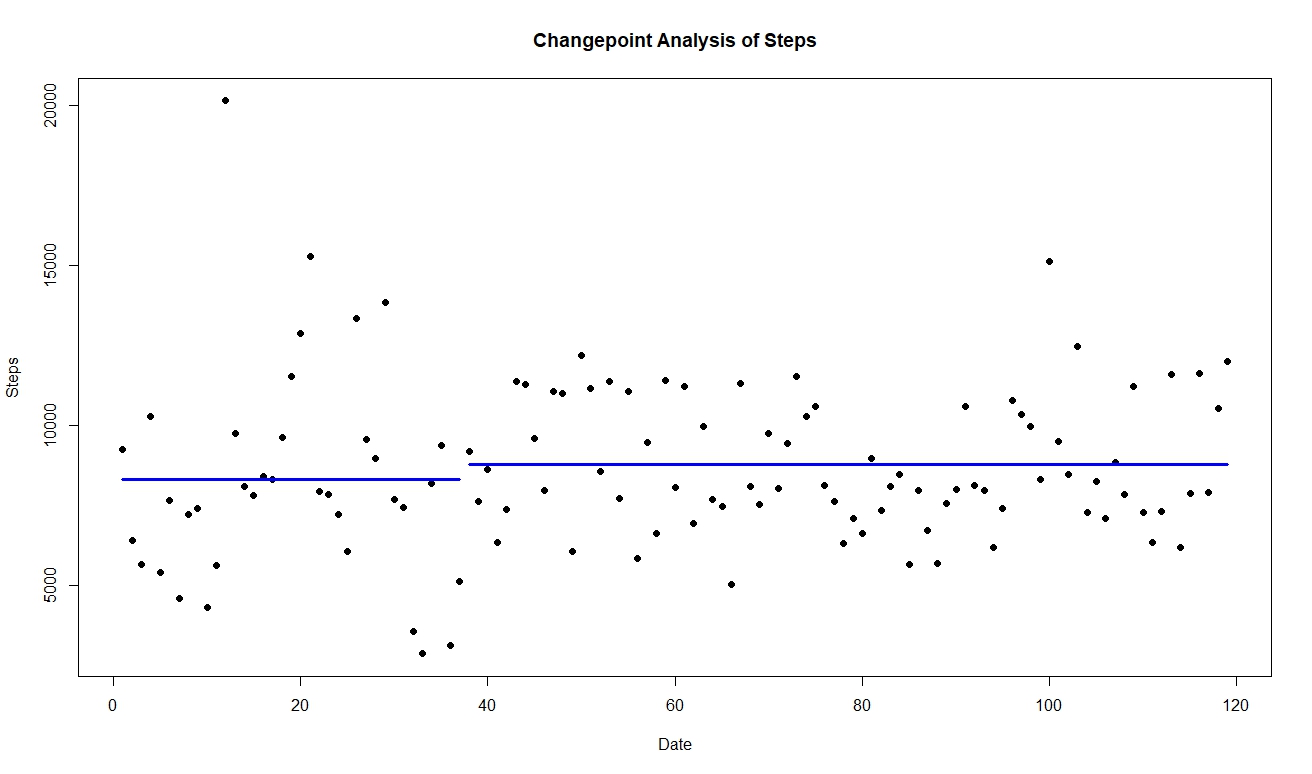 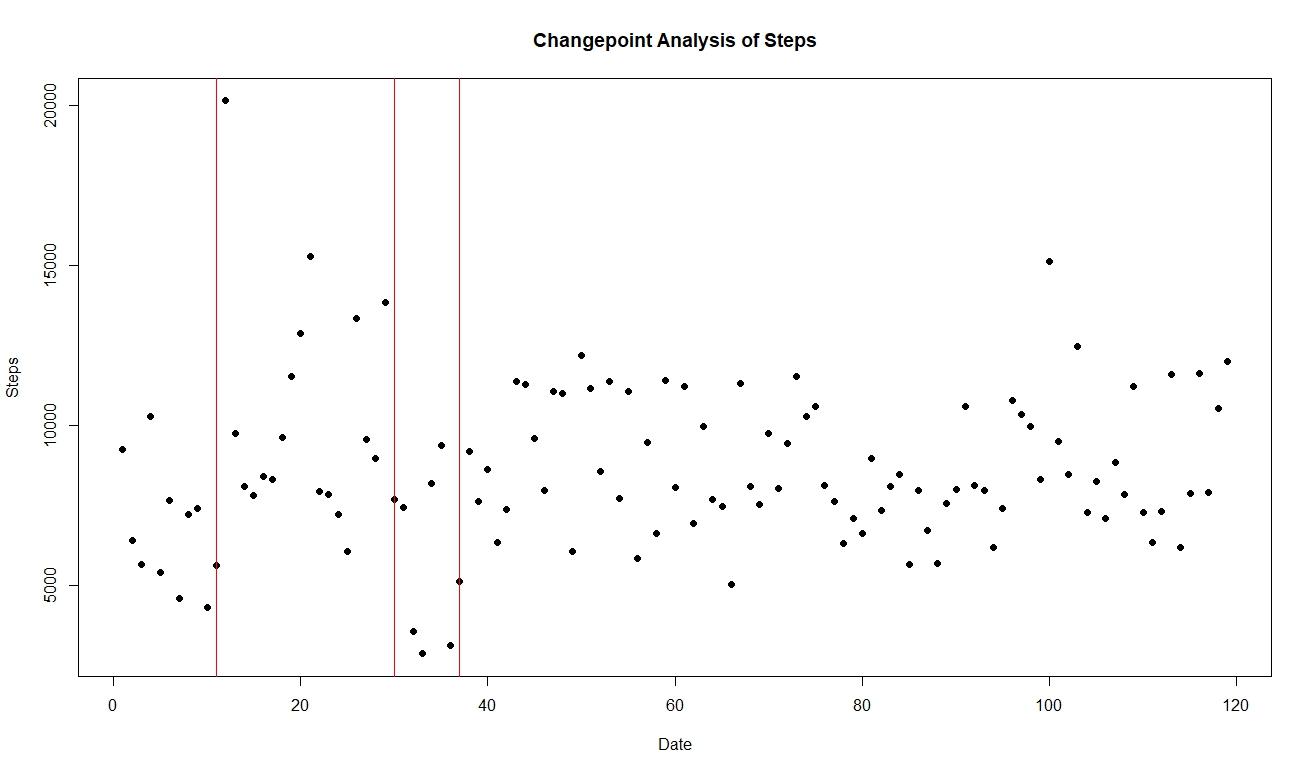 Here is Ash's steps count data with his analysis 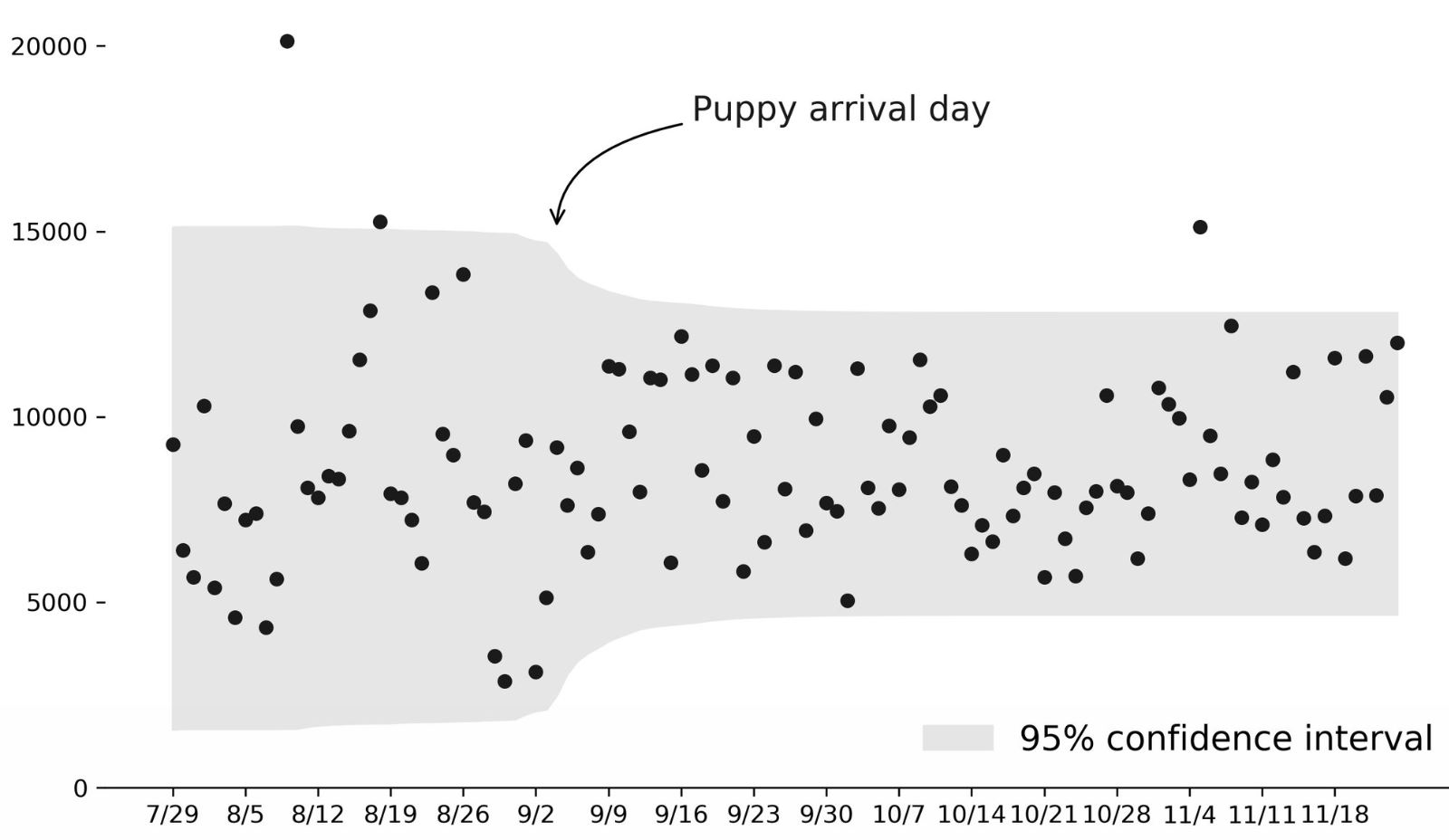 These results are all fairly consistent with identifying the change point around 9/1/2018, with the exception of cpt.mean which in this case is strongly influenced by the outlier around 8/9/18. Is that a good or bad thing? It depends. For example, you could have a manufacturing process where you'd want to be informed right away if there is a process change. On the other hand, intuitively I feel that one outlier shouldn't be able dictate an entire analysis (unless you want it to). For these reasons, I recommend cpt.meanvar or especially cpt.np as being more reliable on the frequentist side. For the Bayesian side, I'd like to see how sensitive the analysis is to using different priors and hyperparameters.

I believe changepoint analysis is a (yet another) great example of the importance and success of hypothesis testing, something which is currently en vogue to critique. Killick and Eckley write