Martial artists have maintained that their martial arts training ("dojo" here used to denote any place of training) prepares them for "the Street". Because of the recent mixed martial arts fad that started in the early 1990s, some fans of sport/entertainment fighting point to UFC-ish events as evidence that what you learn in a dojo doesn't really help one in real life because fighters from those styles are not effective in sport/entertainment events.

Most of these arguments tend to focus only on the contact allowed in sport/entertainment events. However, self defense is truly "as real as it gets". It isn't planned, there are no rules, and literally your life or the lives of others could be on the line. This is opposed to being planned months in advance, lengthy rules, and a fake gold belt being on the line in sport/entertainment "combat".

And arguing based on unrealistic situations is basing your argument on fiction.

Basically, their fallacy boils down to them being impressed by high levels of force. They are so in awe of their god named Force, that they ignore other determinants of reality, like the actual situation, for example. Whatever fighting system fad is in the headlines these days they tend to believe it to be the ultimate. Some really believe entire martial arts have been rendered inferior because some sport/entertainment is popular. That these martial arts have already been used effectively in real life situations, and continue to be used effectively, means nothing to these people.

The moral is to always think situation before force. The dial labelled "force" can always be turned up by you. You are in control of it at all times. There is no dial labelled "situation", however. You just have to train in various real life situations to try and be prepared. For example, anyone can tap a punching bag, and then when asked to hit the bag harder, they can hit the bag harder. Not many people can spar in a ring, and then do well when put in a practice mugging scenario. But yet we are led to believe two people, who get paid no matter what, swinging wildly at each other in a ring is better than training in scenarios we could encounter in real life?

There are at least two levels of realism in fights: contact allowed and the situation. 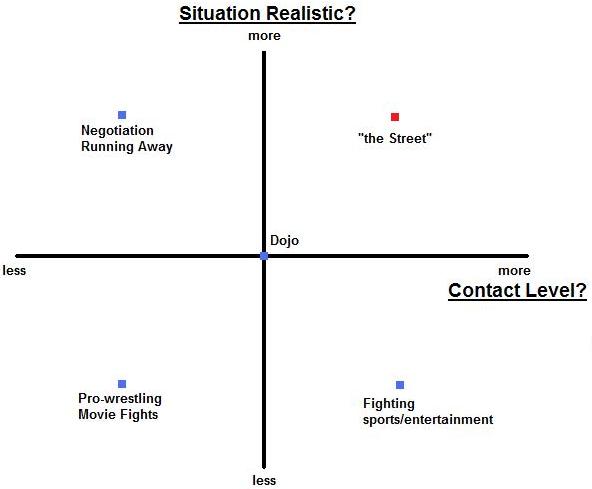 The red 'the Street' point is what many martial artists aspire to train their self defense for. 'the Street' is just a label for the real things that we average Joes/Janes can encounter, or are likely to encounter, in our daily life.

To the left of 'the Street' there is negotiation and running. These, and avoidance in general, are superb self defense options that satisfy the criteria of self defense without physical contact.

Below this, we find pro-wrestling (ie. rasslin') and movie fighting, both areas where the contact is non-existent, low, and/or the situation is always contrived and scripted.

To the right of this we find fighting sports/entertainment. These are UFC-ish events where high levels of contact are allowed, but the situation is contrived. The average Joe/Jane is not likely to find themselves being a professional athlete, fighting for money, for the entertainment of fans, on a pay-per-view event, for a shiny belt, hawking supplements and many other products, agreeing to fight another combat athlete, knowing their opponent in advance, training for months in advance of the fight, knowing they will be in the same weight class, in a ring, with a referee, with ring girls, with announcers analyzing your fight, with doctors standing by, being concerned about points, being coached, with trainers, with many rules, with gloves, with taped wrists and fingers, with groin protection, with restrictions on clothing, knowing it will always be one-on-one, a chance to get a rematch, and on and on, in their real day to day lives. Therefore, appealing to such events as if they have anything to do with real life is not convincing.

It is a sensible assumption that on average 'Dojo' is in the center. The justification for this is that dojo training typically contains elements of each of the other points, and hence can be thought of as an average. For example, dojos can teach how to avoid fights, philosophy, culture, negotiating skills, various drills, not all of which are for fighting, self defense in real environments such as different lighting conditions, uneven ground, fighting around obstacles, with trash on the ground, attacking sport/entertainment prohibited areas such as groin, eyes, knees, and throat, and etc., as well as full contact, and also teach choreographed forms. Dojos are more flexible, in that they can choose to teach any or all of these elements, whereas other venues are automatically only doing one or the other.

Notice that 'Dojo' on average is closer to 'the Street' than sports/entertainment. That is, what the dojo typically lacks in contact level it makes up for by having the situation be more realistic. The training is simply more useful because it is more able to be made a part of real life.

I conclude with a quote from martial artist and historian Robert W. Smith,

Why fight? We practice fighting so that we don't have to fight. If there is a secret in these arts, it is that. Primarily they are taught and learned as self defense in the street, and not to help us compete against expert fighters in tournaments. To insist that they develop champion competitive fighters is to misunderstand their nature. The fact that they are applauded and sanctioned by a bellicose society doesn't excuse them. If we participate in this commercial swindle, we are no better than the street thugs who motivated our practice in the first place. In fine, we learn these arts so that we may live well, doing good to ourselves and others. To contest them for commerce or ego harms us and diminishes both the hard and soft fighting arts.